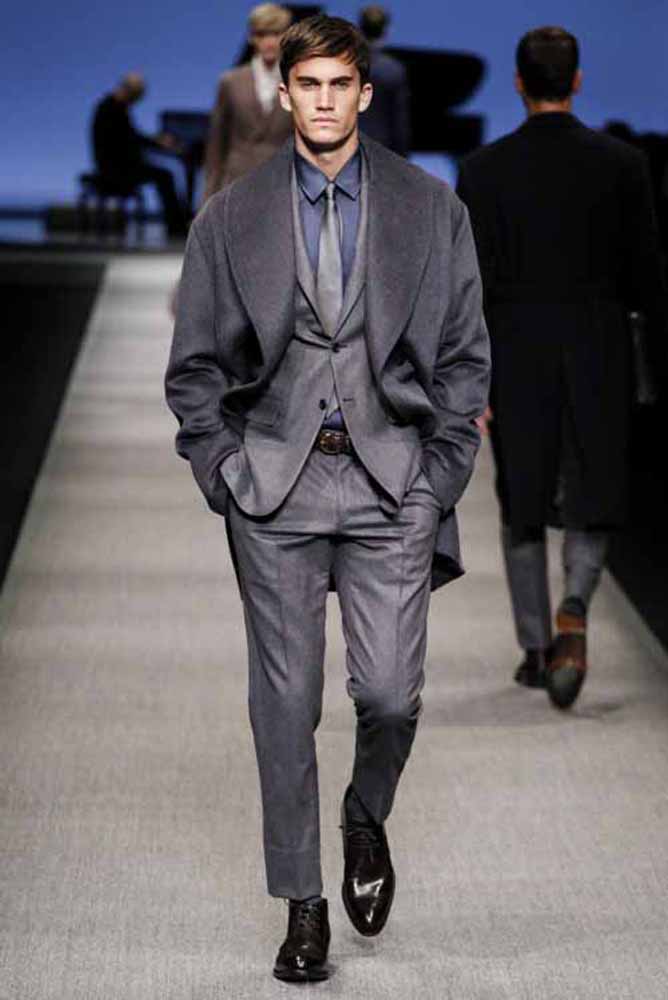 The Men’s Collections for the Fall Winter 2015 season in London, Milan and Paris offered plenty of comfort and plenty of food for thought with the resurfacing of classic lines pertaining to many brands’ DNA and a whizz of creativity by the usual suspects over in the Big Smoke.
There’s something about the Fall Winter Collection that gets us fans of tailoring giddy with excitement at the prospect of tens of beautiful outerwear items and razor sharp suits hitting the runway. The Fall Winter 2014-1015 collections did not disappoint in terms of both. The outerwear camp was dominated with sloped shoulder oversize coats, the ubiquitous bomber jacket, which designers and clients just can’t seem to get enough of, and the parka, another item which has enjoyed a renaissance thanks to the geek chic counter trend.
The tailoring is sharp indeed, with slim fit lines and a nod to many “vintage” cuts. Dolce&Gabbana sent suits out on the runway reminiscent of the dawn of the brand’s menswear in the nineties while Hedi Slimane at Yves Saint Lauren showed skinny tailoring that could have been cut by the master himself. Miuccia Prada also revisited a very Prada-esque aesthetic with her menswear, steering clear of Hawaiian prints or gimmicky accessories.
The colour palette ranged from traditional autumnal hues like burgundy and green to cool winter white and the ever so chic camel, which just exacerbated the elegance and volume of the outerwear. Blues were the accent colours of this traditional palette with grey and black dominating the catwalks.
Prints varied from figurative to abstract, with a return to the nineties slogan tops in the sportswear camp and plenty of masculine fabrics like pin stripes, albeit more creative, tweed and checks. Knitwear was one of the protagonists of the season, an expected role in a Fall Winter season, but with wholly unexpected results.
Whether DNA affirming, vintage referencing or gender questioning, the highlights of the collections were aplenty and the fashion strong, defined and often very wearable.