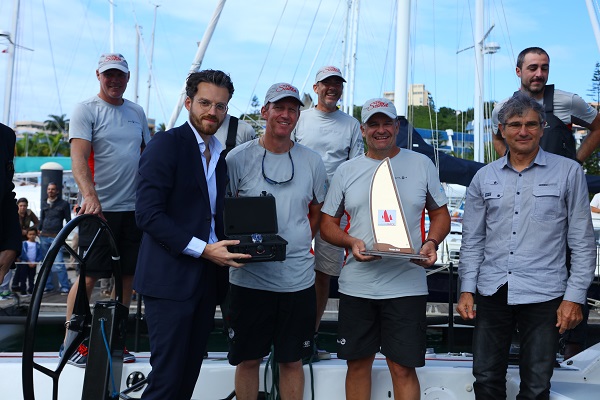 Bell & Ross, the leading reference in aeronautical luxury watches, in collaboration with Gaspard Horlogerie-Bijouterie, has participated in the sixth edition of the biennial offshore event in the South Pacific as the official timekeeper of the sailing race.

With its 1.500 km long around the biggest lagoon in the world, the Groupama Race started on Sunday June 17th from Nouméa, gathering a total of 24 monohulls and multihulls . The fastest anticlockwise sail around New Caledonia is passing through Cap N’Dua in the south and Grand Passage at the extreme north to eventually finish off Nouméa.

Aligned with the spirit of our Watch Beyond campaign which embarks us into the world of the extremes, the Groupama Race - which takes place in hostile conditions - captivated its audience: no port of call, no rest, 26-degreee waves breaking on the deck, rays, turtles and whales. A tactical speed race in Paradise, surrounded by UNESCO World-Heritage inscribed reefs.

With an elapsed time of 3 days 52 minutes and 51 seconds, New Zealand TP52 Miss Scarlet – with sailing A-lister Franck Cammas on board - finished first, and 46 minutes before their opponent New Zealand RanTan 2, skippered by Brian Petersen.

Mr/ Jean-Christophe Chevrier - Bell & Ross’ representative - officially presented the new BR03-92 Diver Blue to Miss Scarlet’s owner Graeme Wilson, congratulating his crew for the great performance. The Bell & Ross’ new diving watch featuring the brand's iconic square case was designed for men whose professions expose them to extreme temperatures, violent acceleration or dangerous pressure. Not only a tool for their missions but also a constant ally…