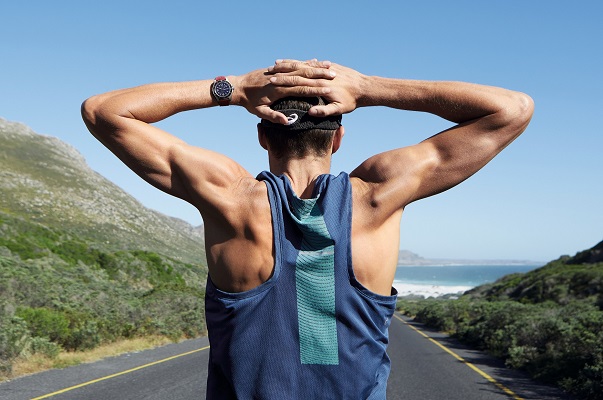 Breitling has partnered with IRONMAN, a Wanda Sports Group company, in launching the Breitling Superocean IRONMAN® Limited Edition timepiece. As part of the partnership, Breitling becomes the Official Luxury Watch of IRONMAN® and will also be present at several events, including the IRONMAN® 70.3® World Championship in Nice, France, and the 2019 Vega® IRONMAN® World Championship in Kailua-Kona, Hawai’i.

To celebrate the partnership and offer a first look at the watch, a special event was held at the Breitling boutique in New York City last night, cohosted by Breitling USA President Thierry Prissert and Andrew Messick, President and CEO of The IRONMAN Group. Over 150 guests attended the event, among them Paula Newby-Fraser – known as the Queen of Kona, who earned the title after winning the IRONMAN® World Championship eight times – and Mike Reilly, the Voice of IRONMAN®. Also at the event were some of the elite athletes who will be participating in the ViewSPORT® IRONMAN® Lake Placid triathlon, set to take place in Lake Placid, NY, on July 28, 2019.

The partnership with IRONMAN® is ideal for Breitling, bringing two premium brands together for the first time. Georges Kern, CEO of Breitling, said, “We’re particularly excited to be working with IRONMAN®. The three members of our Triathlon Squad have all distinguished themselves in IRONMAN® events. Jan Frodeno won back-to-back IRONMAN® World Championships in 2015 and 2016, and Chris ‘Macca’ McCormack has also claimed two titles – in 2007 and 2010. It goes without saying that DanielRyf’s accomplishments have been spectacular: she is the reigning IRONMAN® World Champion, having won four straight titles along with her four IRONMAN® 70.3® World Championships in the last five years. The sport has enjoyed enormous popularity and the performance and endurance of its great competitors reflect Breitling’s values perfectly.”

Daniela Ryf has continued her impressive form and recently won IRONMAN® Austria in Klagenfurt, finishing more than 26 minutes ahead of her nearest challenger. Jan Frodeno showcased his talents once more as he defied scorching temperatures and overcame a talented field to win the IRONMAN® European Championships in late June. Speaking about the partnership, Jan said: “I am very excited to be a part of this partnership between IRONMAN® and Breitling, two iconic brands that are bringing together a sporting elegance that is second to none.”

Andrew Messick is excited about the new partnership: “Breitling has already demonstrated its appreciation for triathlon with its impressive squad of triathletes, all of whom have had great success in our most prestigious events. We are delighted to collaborate with Breitling in the creation of a great new watch that celebrates the passion, commitment, and incredible achievements of our athletes.”

The IRONMAN® Triathlon Series offers athletes the opportunity to push themselves further than they ever thought possible by swimming 2.4 miles (3.8 kilometers), cycling 112 miles (180 kilometers), and running 26.2 miles (42.2 kilometers) en route to completing one of the world’s most challenging single-day endurance races and earning the coveted title of IRONMAN. Since its inception in 1978, the IRONMAN® triathlon has come to represent the ultimate test of body, mind, and spirit for both professional and amateur athletes. The competition stages – swimming, cycling, and running – are activities that feature prominently in the lifestyles of Breitling’s core customer base: men and women of action, purpose, and style. 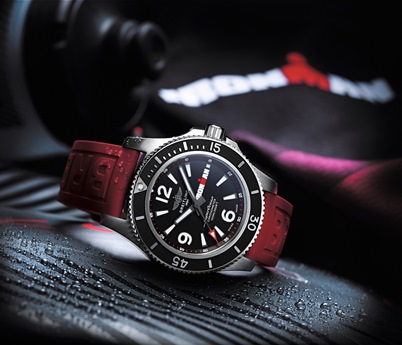 The Breitling Superocean Automatic 44 IRONMAN® Limited Edition, which celebrates the partnership with IRONMAN and its events, is a member of Breitling’s popular family of Superocean divers’ watches. It has a 44-millimeter stainless-steel case and a black dial featuring the unmistakable IRONMAN® logo. It is presented on a red Diver Pro III rubber strap with a pin buckle. Its ratcheted unidirectional rotating bezel is an essential feature for divers as it can be used to track the elapsed time underwater. The numerals, indexes, and hands are coated with Super-LumiNova®, a luminescent material that allows optimal readability in any lighting conditions. The COSC-certified chronometer has central hour, minute, and second hands.

This self-winding watch is powered by a Breitling Caliber 17, an automatic mechanical movement that offers a power reserve of 38 hours. It is water-resistant to an incredible 100 bar (1000 meters).