Dubai: His Highness Shaikh Mohammad Bin Rashid Al Maktoum, Vice President and Prime Minister of the UAE and Ruler of Dubai, launched the 2015-2021 strategy for the International Humanitarian City (IHC). The Vice-President launched the strategy during a ceremony held at the IHC headquarters in the presence of Shaikh Hamdan Bin Mohammad Bin Rashid Al Maktoum, Crown... Read More

DUBAI: The emirate has increased the tourist visa fees and made it non-extendable, according to a media report.

Travel agents and tour operators were quoted as saying by XPRESS that the General Directorate of Residency and Foreigners Affairs (GDRFA) in Dubai has increased the cost of the single entry, 30-day tourist visa from Dh210 to Dh250 from January 1, and has withdrawn the 10-day grace period and the option to extend it for a month.

However, the development could not be... Read More

Winter clothing and blankets donated, whether new or used, should be clean, dry and properly packed. With regards to food donations, only packed and sealed food items are accepted.

Dubai: Dubai Cares on Friday announced that it has contributed Dh5 million in support of the “UAE Compassion” (Tarahamu) initiative. Dubai Cares’ contribution aims to ensure that the displaced children who represent majority of the Syrian refugees, survive the winter storm and have a fair chance of an... Read More

The third fastest winner in the history of the Standard Chartered Dubai Marathon, Ethiopia’s Lelisa Desisa, will be gunning for Olympic legend Kenenisa Bekele and a second win in three years when he lines up at the start of the 2015 event on January 23.

Desisa made history in Dubai in 2013, when not only did he smash the 2:05 barrier on his marathon debut (2h:04m:45s), he led five men across the finish line under that time — an unprecedented achievement.

UAE is a big draw for film-makers, TV producers

The UAE has emerged as the ideal location for film-makers from both the East and the West looking to cut down production costs and paperwork also offering ease of access, world class infrastructure and world famous attractions. A number of movies, both Hollywood and Bollywood films such as Mission Impossible, Star Wars VII, Fast and Furious 7, and Bollywood movie Bang, have been filmed in... Read More 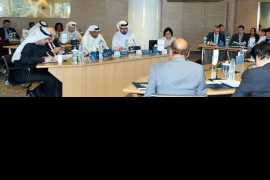 The meeting was organised as part of the Chamber’s mission to represent, support and protect the interests of the business community in Dubai

Dubai: The Dubai Chamber of Commerce and Industry recently hosted the fourth quarterly roundtable meeting of 2014, with representatives of business councils and groups and discussed business community issues.

The meeting was organised as part of the Chamber’s mission to represent, support and protect the interests of the business... Read More

The UAE’s nuclear energy programme is progressing on track to begin operations in 2017, the Emirates Nuclear Energy Corporation (ENEC) said on Tuesday.

The first unit of the $20 billion Barakah project – which includes four reactors in total – is now more than... Read More

Two UAE airlines in top 10 among 449 airlines, according to AirlineRatings.com

With the flurry of plane crashes in 2014, many people are now afraid to fly. There’s no reason to avoid air travel completely, though. According to AirlineRatings.com, there are a number of airlines out there which have excellent safety records, and two of them are actually based in the UAE.

The aviation website announced on Tuesday that Emirates and Etihad Airways are among the top ten safest... Read More

The tournament will see a bigger setup for the public and VIP zones and will begin at sunset on both days against the backdrop of Dubai Marina skyline and Mina Seyahi coastline.

Dubai — The Beach Polo Cup (BPC) Dubai, a prestigious event on the international sports calendar, will take place at the Skydive Dubai complex at Dubai Marina on April 10 and 11.

Mamemo, creators of the concept a decade ago said, the Dubai tournament will see the top polo players of the international... Read More