Monumental 20th edition of DSF in final stages of preparation

Dubai: Preparations for the 20th edition of the annual Dubai Shopping Festival (DSF) are in the final stages in time for its opening on January 1.

An extra special DSF calendar is expected next year as the festival reaches another milestone of being the longest running festival of its kind spanning almost two decades. This year’s theme, ‘20th... Read More

Globe Soccer Awards’ fifth annual ‘Dubai Football Gala – presented by Audi’ is set to welcome stars of the beautiful game and witness a battle for Club of the Year from Real Madrid, Juventus, Ajax AFC, FC Bayern Munich and FC Basel in a glittering gala dinner and awards ceremony.

Organised by Dubai Sports Council and BC Bendoni Communication, and... Read More

Attraction will be located on upcoming Deira Islands, connected by bridges to mainland

Dubai: Hot on the heels of the full leasing of Nakheel’s new Night Souq at Deira Islands, the developer has issued a tender for the construction works, a spokesperson said.

Initially launching as a twice-weekly service, a third service will be introduced in January.

The number of flights flydubai operates between Dubai and Bratislava could be doubled to four a week by next summer.

Abu Dhabi: Etihad Cargo, the freight division of UAE flag carrier Etihad Airways, achieved an all-time record in November when it carried 53,292 tonnes across its global network in one month.... Read More

To span a distance of 7 km, Dubai Trolley will serve as an exotic, easy-to-access connecting link between the various iconic attractions in Downtown Dubai including Burj Khalifa , the world’s tallest building, and The Dubai Mall , the world’s most-visited retail and lifestyle destination. 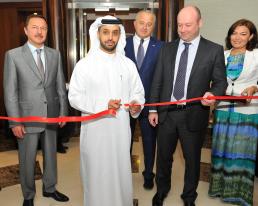 Emirates and Dubai’s Department of Tourism and Commerce Marketing (DTCM) have launched a global campaign worth $20 million to attract tourists to Dubai.

The ‘See you in Dubai’ campaign, one of the largest tourism promotional campaigns conducted by Emirates, will focus on markets in Europe, Asia, Africa, Latin America and the Middle East. It play out across print, broadcast and outdoor media... Read More

The first of four reactors being built at the United Arab Emirates’ Barakah nuclear power plant is 61 per cent complete and on track to start up in 2017, Emirates Nuclear Energy Corp (ENEC) said on Monday.

The $20 billion Barakah project, funded by the Abu Dhabi government, is expected to provide 24 per cent of the UAE’s energy by 2020, when all four reactors come onstream, ENEC’s... Read More

He unveiled the stamps on Sunday at a ceremony held at the Sheikh... Read More