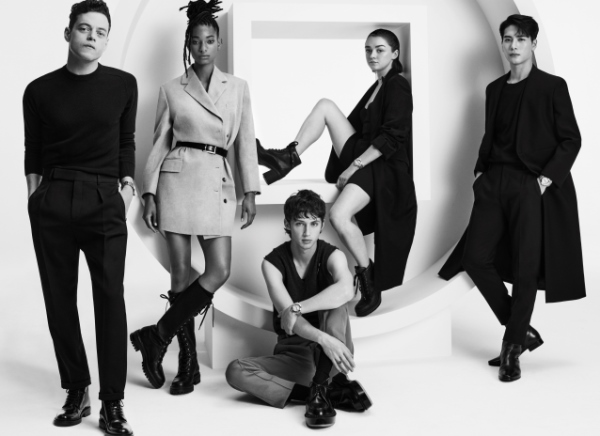 Committed to seeking out powerful, transformative roles that challenge expectations, actor Rami Malek follows his own path. “I gravitate to roles that are inspiring and progressive. It’s my hope that some of these choices contribute to moving the industry forward.”

It’s an understanding of success based on the open-mindedness, diversity and creativity that connects the Pasha de Cartier community, of which he is one of the new ambassadors.

Born in 1981 in Los Angeles, Rami Malek garnered attention for his work in Mr. Robot, for which his interpretation of the lead character earned him an Emmy Award and industry recognition.

His career accelerated in 2018 when he played musician Freddie Mercury in the Queen biopic BOHEMIAN RHAPSODY, which earned over $900 million at the box office. For his starring role he received an Academy Award® as well as SAG, BAFTA, and Golden Globe® awards for Best Actor in a Drama. The film itself also won a Golden Globe for Best Motion Picture Drama, in addition to receiving four Academy Award nominations including a Best Picture nomination.

This year, he will appear as the villain in the highly anticipated 25th James Bond film, No Time to Die.

Having faith in his creativity, defying all obstacles and expressing his personality without compromise: these are the keys to the success of singer-songwriter and actor Troye Sivan. This positive ambition and conception of life make him a natural new ambassador for the Pasha de Cartier watch.

Born in South Africa in 1995 and raised in Australia, he began to post his songs online at the age of 14. Soon after, in 2012, he took the next step as a singer by creating his YouTube channel. This versatile singer, actor, model and director has an organic ease and flair, with a body of work in phase with the person he is: “Who I am is very closely linked to what I make. I’m just saying exactly what I want to say and exactly how I want to say it. It’s a little terrifying but also really exhilarating. I’m really pushing myself to explore the edges of my creative pursuits.”

This authentic attitude resonates with his audience and has earned him more than 6 million subscribers on YouTube in just a few years.

At the age of 20, his first album Blue Neighbourhood hit the top of the iTunes charts in more than 66 countries. Time magazine described him as “the perfect pop star of 2018”; that same year, he continued his rise as an artist with Bloom, named one of the best albums of the year by Rolling Stone magazine. In his career to date, Troye has amassed more than 6.7 billion combined global streams.

Multi-threat singer and activist Willow Smith doesn't let herself be pigeon-holed. All areas of expression interest her and serve her achievements: “You always have to bite off more than you can chew to evolve as a person and especially as an artist, and prove to yourself that you can do this and that you can expand.” This open-mindedness echoes the progressive and diverse creation of the Pasha de Cartier community, of which she is one of the ambassadors.

Willow created her own SoundCloud where she posted her solo songs as well as duets with artists of her generation. Activist, fashion icon and performer, she adapts to all genres and hosts the talkshow Red Table Talk with her mother and grandmother, which deals with all the social and cultural issues of the moment through a trans-generational perspective. Highly watched, the Emmy-nominated show has been extended until 2022.

“To build something and take an idea from just an idea to a full-blown project, it really does take a village. So for me it's about finding the right team, finding people who you trust.” Actress Maisie Williams places teamwork and exchange at the heart of her artistic achievements. This rewarding collaborative approach forges new, unique and creative paths, in line with the Pasha de Cartier community, of which she is one of the new ambassadors.

Born in England in 1997, by the age of 22 she achieved worldwide fame through the role of Arya Stark in Game of Thrones, for which she obtained two Emmy Award nominations. She has since made numerous films, including the highly anticipated American blockbuster produced by 20th Century Studios, The New Mutants, releasing in theatres August 2020 and Sky-produced series, Two Weeks to Live.

She is also a committed entrepreneur, with several start-ups intended to connect figures and creatives from the world of art, fashion, TV, cinema, literature and music in order to initiate collaborative projects.

“There's no final destination in life, but every step towards your goal, every chapter in your history, is a big time for me. Just trust yourself and write your own history.”

A source of inspiration for an entire generation, Chinese rapper/singer/dancer Jackson Wang draws his energy from a need to encourage young people to be themselves. This definition of progress – being open to the world and connected to others – links him directly to the Pasha de Cartier community, of which he is one of the new ambassadors.

The former fencing champion born in 1994 joined the K-pop group GOT7 in 2014 as a singing, dancing and rapping triple-threat. This creative flexibility places him at the top of the young generation of idols, with a following of over 9 million.

In 2019, he created his very own Team Wang label in which he mixes hip-hop, r&b and rap influences, confirming his incredible versatility as an artist able to set a style, and forging a singular, creative path just like the men and women of Pasha de Cartier.