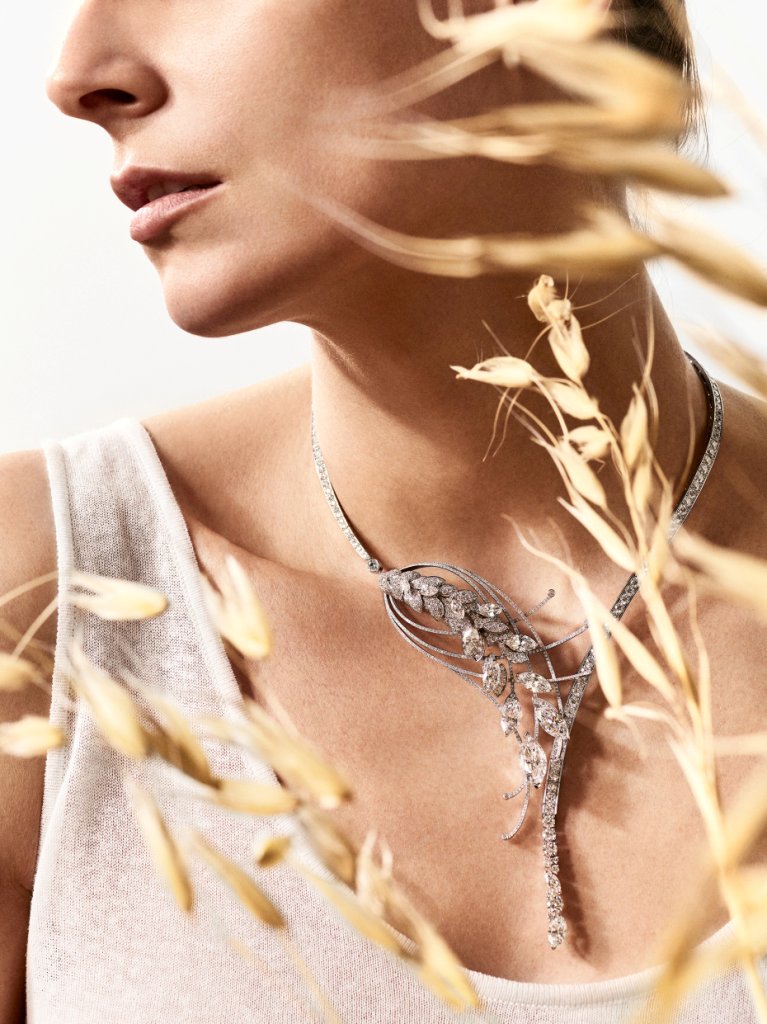 Parisian luxury house Chanel pays stunning tribute to one of its famous founder’s most personal symbols, wheat in its stunning new High Jewellery collection Les Bles de Chanel. It is inspired by her childhood memories of walks with her father in the wheat fields around their home in South-West France. Fashioned in the most precious materials the collection’s pieces capture the beauty of wheat sheaves swaying in the wind in lines that recall the entire cycle of the grain. Stamped by the iconic brand’s impeccable style this collection offers utterly feminine adornment for the discerning jewellery lover

In her lifetime, Mademoiselle Chanel treasured every precious memory and paid grand tribute to each by transforming them into motifs and much sought-after collections. Highly sensitive, she could interpret subtle signs from the universe and linked them to aspects of her own life, in ways an ordinary person could not. For in her heartfelt opinion nothing in life happened by mere chance.

It was all meant to be.

The camellia bloom was to become her favourite motif after the great love of her life Boy Capell presented her a bouquet of the white blooms. She likened them to a rose without thorns, pure and elegant and they found honoured place in her collections.

Her trip to Venice shortly after Boy Capell’s death in a motoring accident was to recover from the tragic loss. But it was there that she discovered the lion motif of the city and was convinced that a greater hand had taken her there, for she was a Leo having being born on 19th of August. Thereafter, the lion became her favourite animal and was featured in unique ways in her fashion and jewellery collections.

And so it was with wheat in all its forms. It linked her to her father and brought back fond memories of walks in the wheat fields around their home in South-West France while he referred to the grain as ‘the good wheat’. It symbolized for him all that was wholesome, abundant, prosperous and indicated renewal of life and fortune. Coco Chanel’s birthday incidentally, fell during the harvest festival.

That key figure in her life may have abandoned her and her sisters at an orphanage when she was just 12 years old. But Coco chose to cling on to the few precious good memories, treasuring them, transforming them and thereby paying magnificent tribute to ‘the good wheat’ of her father by featuring wheat sheaves as motifs in her collections.

Years later when her good friend Salvador Deli said he would paint her, she asked him to paint her some ears of wheat. She hung the canvas depicting the picture of a wheat ear against a black background in her apartment at rue Cambon in her suite at the Ritz or in her home in La Pausa, where she also kept a wheat sheaf in a vase and had carved wheat sheaves.

In her entire lifetime Coco Chanel was to design her first and only collection Bijoux De Diamants in 1932 featuring only diamonds. The reason for this being, to put it in her own words, “If I have chosen diamonds, it is only because they represent the greatest value in the smallest volume”.

And while the wheat motif has featured liberally in Chanel’s fashion collections, this year, for the first time ever the iconic brand dedicates a high jewellery collection named Les Bles de Chanel to its founder’s fond memories. Les Bles (French for the wheat) collection is composed of 62 pieces which in their pliancy and softness capture the beauty of a wheat field swaying in the breeze as well as follow the life cycle of the world’s second most important grain.

The brand presented its new Haute Jewellery collection at Coco Chanel’s favourite suite at the Ritz in Paris, where she lived the last 36 years of her life. It overlooks Place Vendome and Ritz Gardens and consists of two bedrooms, a living room and two bathrooms. All of them were decorated with ears of wheat, jewellery and her personal items.

For this launch, which took place in early July 2016, the brand collaborated with the legendary French street artist Gad Weil. He recreated an entire wheat field in black lacquered boxes in the square called Les Bles Vendome (Vendome wheat). Visitors to Place Vendome that week, found themselves walking in a wheat field.

Premiers Brins, Brins de Printemps and Brins de Diamants are lines which pay homage to the shoots of wheat in early spring. Featuring diamonds, peridots, crystalline and aquamarines they play with transparency to capture the tenderness of the grain at this stage of its life.

The wheat harvest is evoked through the lines Moisson Ensoleillee, Bouquet de Moisson and Moisson de Perles set with diamonds, yellow sapphires and pearls basking in the warmth of the summer’s sun.

The Les Bles de Chanel collection’s magnum opus is of course the Collier Fete Des Moissons which celebrates crowns of braided wheat set with 121 multicoloured diamonds with a total weight of 46.7 carats, 932 yellow diamonds weighing 40.4 carats and 165 white diamonds. In its heart just like the sun glows a magnificent yellow rectangular diamond of 25 carats with cut corners. Each of these pieces is a work of art and usually takes about two years from the initial design drawings to the finished product.

Chanel’s new Les Bles de Chanel is a lavish tribute to one of its beloved founder’s most personal symbols.