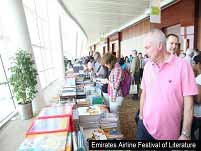 The Emirates Airline Festival of literature takes place at InterContinental Hotel in Festival Cityuntil March 12, is centred around the theme of ‘Time’

Dubai, 28 February, 2016: The countdown to the Emirates Airline Festival of Literature begins today with a packed programme of literary treats promised for the eighth year of the Festival, which for the first time will run for almost two weeks from 1 March until 12 March. More than 150 writers, poets, illustrators and thinkers will present a dazzling array of genres, topics and subjects, appealing to audiences of all ages and tastes.

‘Each year the Festival evolves to embrace new ideas, appreciate new perspectives on literature, and celebrate the traditional forms we hold so dear,’ said Isobel Abulhoul, CEO and Trustee of the Emirates Literature Foundation and Festival Director of the Emirates Airline Festival of Literature. ‘The huge array of talent and topics that we are privileged to cover in 2016 has allowed us to extend the length of the Festival and do justice to the most diverse programme yet.’

The Festival is particularly honoured in 2016 because it is the first international literary event of the Year of Reading, an exciting initiative declared by UAE President His Highness Sheikh Khalifa bin Zayed Al Nahyan and supported by the Festival’s patron, His Highness Sheikh Mohammad bin Rashid Al Maktoum, Vice-President and Prime Minister of the UAE and Ruler of Dubai. To highlight the initiative, the Festival has commissioned a survey to capture and track the reading habits of Dubai’s school children.

Dina Al Herais, Vice President Commercial – VIP Customer Relations said: ‘There has never been more of a need for creative collaboration to inspire a new generation of readers who will go on to become the next innovators, thinkers and intellectuals. This is why we are proud to support the Emirates Airline Festival of Literature, the first international literary event in the Year of Reading. As an airline that connects people to their passions, we will help connect the people of Dubai to modern-day authors and writers who speak to all ages, cultures and genres, inspiring local conversations about the written word to create a wealth of wonderful literature activity.’

Saeed Al Nabouda, Acting Director General of the Dubai Culture & Arts Authority, said: ‘The Festival marks the beginning of the Dubai Art Season, which celebrates the artistic, cultural and literary diversity of our city, and the strong intercultural dialogue that we promote through various initiatives. Dubai Culture has been extending its support to the Festival over the past seven years, and we are delighted that it has now evolved as one of the most anticipated and widely attended literary events in the region. This year, the Festival is even more special as it coincides with the UAE marking 2016 as the ‘Year of Reading.’ We will continue to organise a wide range of activities this year through leading organisations including the Emirates Literature Foundation. This complements our goal of promoting a vibrant literary culture in the UAE and in nurturing the next generation of writing talent. The Festival will continue to engage our community by drawing them into the captivating world of the written word.’

The Festival will be the first initiative to kick off the largest-to-date showcase of city-wide art and cultural events to mark the third edition of the city’s umbrella arts initiative, Dubai Art Season, during 1 March to 30 April.

One of the initial findings from the first phase of the survey shows that more than half of the children taking part said that they wished they had more time in their day to read.

‘Today’s children have a bewildering range of activities to choose from in their leisure time so it is heartening to see that reading for pleasure is still high on the agenda,’ commented Abulhoul. ‘Parents should be mindful that many children would like more time to indulge their love of reading, but find it hard to do so as their days are so packed. More than anything we need parents to be involved in their children’s reading habits. Reading from a young age sets children up for success in later life and that message must get across to families across the country. One of the Festival’s key aims is to bring out a passion for literature. The reception our authors receive when they visit schools or take part in the Education Days emphasises the importance of the Festival in firing their imagination’.

The Festival’s strong education-focused programme allows students and youngsters in the UAE and the Gulf region to meet their favourite authors during the ever popular Education Days and the brand new Student Sessions. These will be held at the home of the Festival, the InterContinental Hotel, Dubai Festival City as well as in numerous locations in Dubai and additionally, many authors will be visiting schools and colleges to meet and interact with students.

For the first time the Festival will be hosting Poetry Live! GCSE Poetry Day, an international session where poets interact with the students who study their work as part of the GCSE curriculum. The event will feature UK Poet Laureate Carol Ann Duffy, John Agard, Simon Armitage, Imtiaz Dharker and Grace Nichols and has already proved to be immensely popular among schools.

Reaching Out to the Community

The Festival is proud of its commitment to community-based engagement. This year more than 1200 volunteers will be helping to make the Festival happen, demonstrating that the ideals identified in the recent World Government Summit are already alive and well in Dubai. In addition, the Festival stages the vibrant Fringe, which runs alongside the Festival, with student performances and art displays.

The Festival also engages the community with a number of competitions. New this year are the Emirates Airline Capture 380 and the Costa Debate, which were incredibly successful and promise to return next year.

Returning competitions saw the Taaleem Award with 700 entries submitted, and the Oxford University Press Story Writing competition with over 1500 entries. Students from every Gulf country participated in the Chevron Readers’ Cup and the Hamdan Bin Mohammed Heritage Center Qasidah Par Coeur Competition saw a growth in participation from students in all categories. In addition the Montegrappa Writing Prize continues in its quest to discover the new writing talents in the UAE.

Spotlight on the Emirates is a brand new segment from 1-3 March, focusing on the UAE and its history and culture, with a number of renowned Emirati literary stars along with sessions paying tribute to the literary culture of the UAE and one of its greatest citizens, Mohammed Bin Hadher, renowned Emirati poet, diplomat and UAE businessman.

New for 2016 is the first ever Literary Cruise, an evening to remember with philosopher AC Grayling who will discuss the importance of literature, whilst sailing along the Dubai Creek, against the extraordinary backdrop of the historic buildings lining the banks.

Also new to the Festival is the Time Travel Dinner where speakers Anthony Horowitz, Michael Dobbs and Suhel Seth will share stories with the audience, who will attempt to create a Festival time capsule.

This year is Shakespeare’s 400th anniversary and Steven Berkoff, renowned screen and theatre personality, will be bringing his critically-acclaimed play, Shakespeare’s Villains, to the UAE for the first time, and thespians Meera Syal, and Robert Lindsay known for their versatile TV roles, but also for their work with the Royal Shakespeare Company, will be paying tribute to the Bard. The Sonnet Exchange is an international project celebrating Shakespeare’s poetry and the Festival will feature award-winning contemporary poets Imtiaz Dharker and Khalid Albudoor who will be performing their poetic responses inspired by the Bard’s sonnets. In addition to these, students can also enjoy Shakespeare screenings and talks by thespian Fiona Lindsay, brought to the Festival by Digital Theatre.

Astronaut Chris Hadfield will be talking about his experiences in space and the honour of commanding the Canadian arm of the International Space Station. A panel of UAE Mars Mission members will also be discussing their efforts to launch a probe in commemoration of the UAE’s 50th anniversary.

The science of health is also one of the themes of the 2016 Festival, resonating with the UAE Ministry of Health’s new policy, with its’ emphasis on prevention. The Diet Myth author Tim Spector will delve into the destiny of our genes and the theories behind Epigenetics (the study of how external forces alter the characteristics of genes), while Baroness Susan Greenfield unlocks the potential of the brain with her latest book, A Day in the Life of the Brain: Consciousness from Dawn ‘till Dusk, and Reasons to Stay Alive author Matt Haig, tells us his first-hand experience of dealing with depression,

For those looking for tips on holistic living, the on-line sensation Joe Wicks, known as The Body Coach, can help you get fit in 15 minutes. And let’s not forget about the importance of feeding children correctly. Mumpreneur Annabel Karmel discusses work-life balance and the nutritional value of your toddler’s meals.

Amongst the international names featured in the Festival are television stars Nadia Sawalha, Lisa Faulkner and John Torode discussing their books and their varied on-screen careers and Sean Fay Wolfe self-published author of an unofficial Minecraft fan adventure trilogy. Of particular interest to young readers will be the host of beloved children’s authors and illustrators coming to the Festival this year. Jacqueline Wilson, Horrible Science series writer Nick Arnold, and many more will entertain children of all ages with talks, discussions and workshops

Not to be Missed

Not to be missed events at the Festival this year include Wahat Al Zaman, an evening of performance, theatre, literature and music. The evening is dedicated to Sir Maurice Flanagan, whose support at the inception of the Festival was invaluable to its success, and will feature a host of stars including UK Poet Laureate Carol Ann Duffy, Chris Hadfield, Meera Syal and Emirati writers Khalid Al Ameri and Ali Abu Al Reesh.

Returning favourite Desert Stanzas will feature poets from around the globe reciting poetry under the stars. The event continues to be one of the most popular at the Festival and the most-commended by attending authors. This year, Emirati poet Nujoom Al Ghanem, Millennium Poet Simon Armitage, versatile writers John Agard and Grace Nichols and the youngest World Poetry Slam Champion Harry Baker will enthral the crowd with their poetry in an authentic desert setting.

The Orwell Lecture this year will be given by linguist David Crystal, who will speak about George Orwell’s beliefs of the political use of language and the famous concept of newspeak as showcased in his dystopian novel Nineteen Eighty-Four. Accompanying David will be his co-writer Hilary Crystal and son, actor Ben Crystal, who will read selected extracts from Orwell’s work.

Isobel Abulhoul concluded: ‘Of course, none of this would be possible without the unending support of our title sponsor, Emirates, and our partners Dubai Culture and Arts Authority. We have benefited greatly from their insights as well as the guidance of the Board of Trustees of the Emirates Literature Foundation.’

Many main sessions, workshops, masterclasses and special events have sold out already and many more are expected to sell out soon. Ticket prices start at AED 50 and can be purchased via the Festival website or at select WHSmith stores across the UAE.