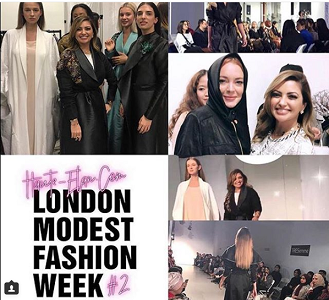 Lindsay Lohan, who was a guest of honour at the inaugural London Modest Fashion Week (LMFW), attended wearing a hijab and halal make-up, The National informed.

Lohan was invited by Haute Elan, the fashion house behind the event and was seen chatting to Saudi abaya designer Samah Khashoggi, who was showing her latest collection.

"Oh my days!" its post read. "As if Lindsay Lohan came over to say hello to Team Hawa! She was so lovely and was saying how she's into halal cosmetics and what she’s actually wearing on her face today was all halal!! Well all I can say is if it's good enough for Lindsay Lohan, gurlll whatcha all waiting for?!"

London Fashion Week was a two-day event which ended on Sunday, February 18.

Lohan, who has expressed an interest in Islam and modest fashion, was spotted wearing a burkini in Thailand last year. During an appearance on American talk show The Wendy Williams Show, Lohan announced that she has plans to shoot a film in Saudi Arabia soon and that she is also looking into designing an island in Dubai. In addition she told Williams that she was launching a make-up line from Dubai, and she posted a sneak peek of some products on her Instagram, however the posts have since been removed.

We spoke with Nancy Paton, an award-winning Abu Dhabi filmmaker who will be making the Saudi Arabia-set film with Lohan this year. She told us that Frame will be shot in the UAE and Saudi Arabia, with the cast made up largely of Saudi and Emirati talent, and predominantly women.