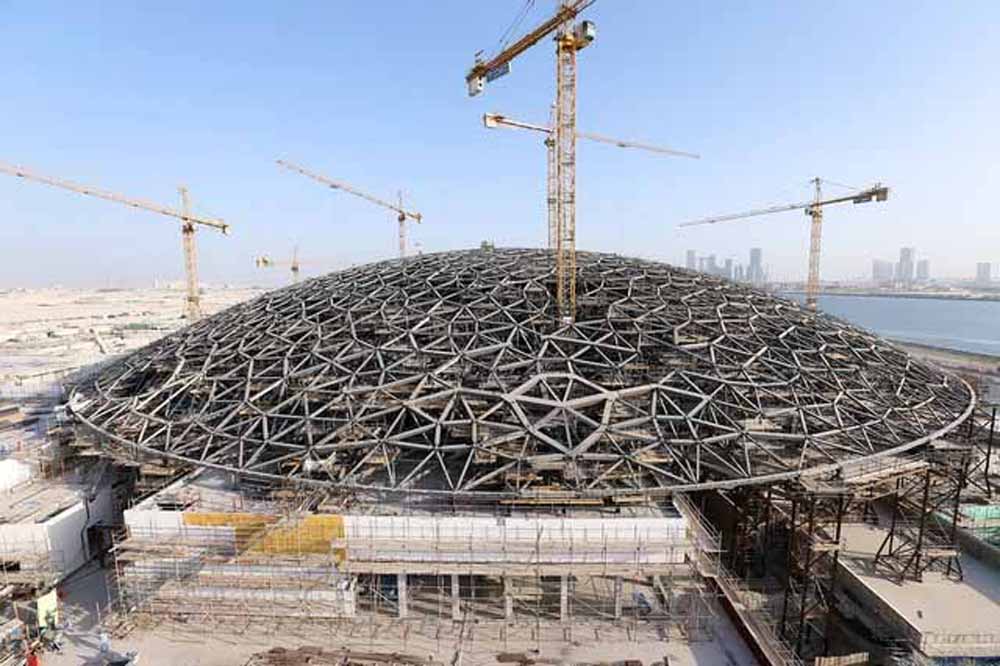 Abu Dhabi: Following months of testing, the massive dome of the Louvre Abu Dhabi has been successfully lowered into its final position.

The operation is the first of its kind in terms of the construction sector for a permanent structure of this scale and size, the Tourism Development and Investment Company (TDIC) announced on Sunday.

The distinctive dome of the Louvre Abu Dhabi, which was completed over the span of ten months, is now firmly in place over the museum’s four main pillars.

The dome installation process included raising the dome off the temporary pillars and then lowering it 38 centimetres onto the permanent pillars. The operation involved 32 hydraulic jacks that can hold up to 10,000 tonnes. The massive cranes were controlled remotely as they operated simultaneously.

The dome was lowered into its final position in the presence of Ali Majid Al Mansouri, TDIC’s chairman of the board.

“We are proud of the successes and milestones being achieved on the site of Louvre Abu Dhabi. We applaud the dedication and hard work of the teams working together to achieve this unprecedented work that reflects the best of the world of architecture, engineering and construction today. This also attests to the continued drive of the UAE to be one of the few countries in the world where unique projects such as this one can happen,” Al Mansouri said.

The bearings onto which the dome was placed underwent months of testing in California, where it was proved they can support the final weight of the dome, which consists of 85 super-sized steel elements and weighs 7,000 tonnes — almost the weight of the Eiffel Tower.

Johann Sischka, an official of a leading Austrian steel engineering company involved in the construction of the dome, said: “The construction and sophistication of the Louvre Abu Dhabi’s dome is among the more unique projects we have undertaken. It is remarkable in its design and size, and given that it must be placed in precise positions on its four piers, there was no room for error. One would not believe the amount of detail that goes into achieving the results we have realised today.”

Construction is progressing steadily on-site. To date, the concrete work has been almost completed. A total of 34,000 tonnes of reinforced steel have been used and over 21 million man hours logged during the courseof the project.

The construction of the permanent gallery structures have been completed along with the concrete work for the museum’s basement levels and the security screening facility. This includes a highly secure seven-metre deep basement through which authorised vehicles will transport all the artwork of the museum.

The Louvre, which is set to open in the Saadiyat Cultural District in 2015, will be home to an unrivalled collection. The artworks and sculptures which will be displayed in the museum’s permanent and temporary galleries have been sourced from across different civilizations and regions, enabling visitors to discover shared influences and connections between different cultures around the globe.

Master classes for students will also be presented at the museum to engage with university students and to help them appreciate the importance of museums and their wider cultural context.