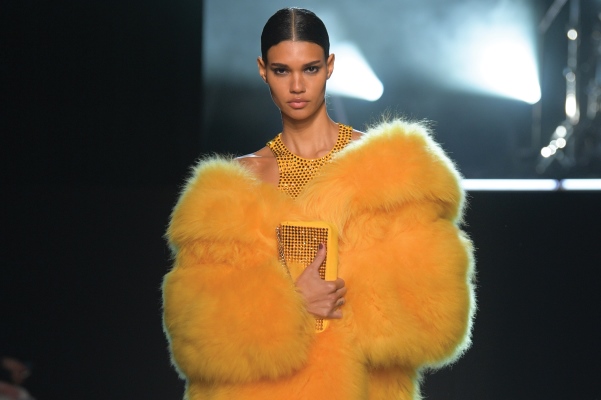 Kors leaned into what he does best, classic tailoring for dressing up during day, draped and asymmetrically cut jersey sequin gowns, dynamic knits, and lots and lots of statement outerwear.

“When I think about New York, it’s the stride, it’s always the stride,” said Michael Kors, previewing his fall collection about stepping out and turning heads.

Kors shifted his show to the evening hours this season, and enlisted Miguel to warm up the crowd. He got toes tapping, including those of stylish New York Mayor Eric Adams, who arrived in a blue jacquard dinner jacket, monogram shirt cuff and power bead bracelets peeking out from the right sleeve, and chatted about his support for the fashion industry. 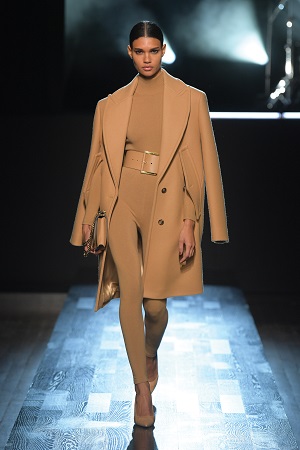 “I’m a glass half full kind of guy,” Kors explained, stating the obvious. “Back in the early ’90s, when we were dealing with the AIDS pandemic, we thought the world was over. But I was sending out exuberant collections, we were all going out. The same thing happened after 9/11, then the Aughts happened.… Now, it’s the same thing.”

Kors leaned into what he does best, without a lot of surprises — classic camel and tweed tailoring for dressing up during the day, draped and asymmetrically cut sequin jersey gowns, dynamic knits, and lots and lots of statement outerwear.

Covered but provocative was the mantra, with itty-bitty minis under mega coats, as is the trend this week.

For sure, the canary yellow knitted shearling as big as Big Bird would create a fork-dropping moment. “Isn’t that what you want?” Kors laughed. “Is there anything wrong with having a few people go, ‘I hate her’?”

There were more understated drama coats as well, including a camel double-faced alpaca hooded style that was monochromatic chic over a ribbed sweater dress and stretch stocking boots, and an oversize faux-croc coat made for shrobing.