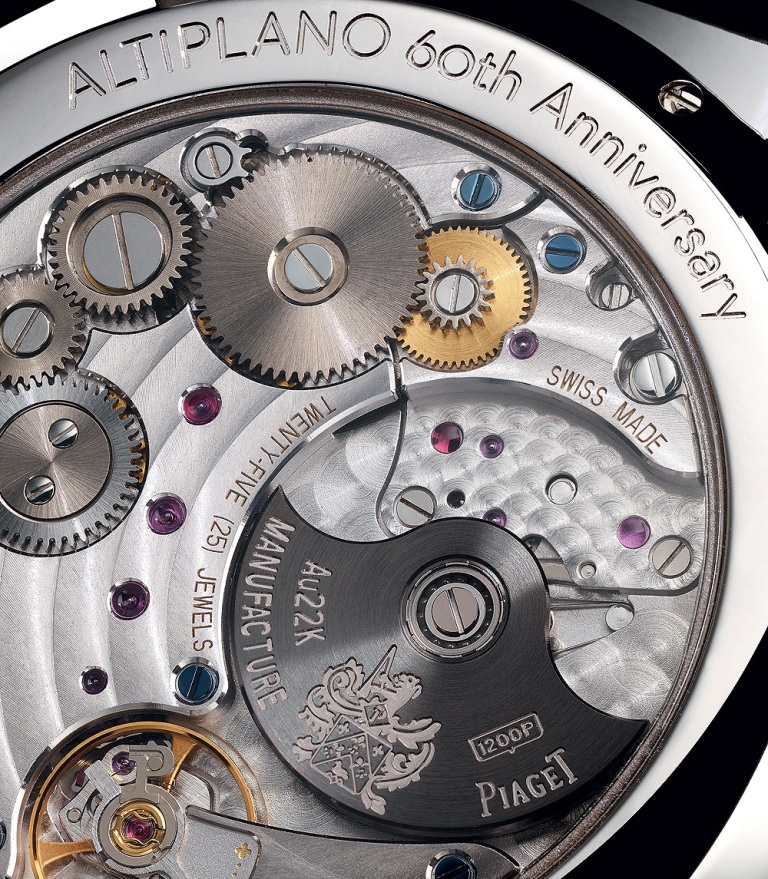 1957, 9P and Piaget Altiplano are three terms brought together by destiny. For it was sixty years ago in 1957 that the renowned watchmaker presented the world’s ultra-thin wristwatch, the Altiplano, housing what was then the world’s thinnest mechanical movement, Caliber 9P. Naming this year as ‘The Year of Altiplano’, the iconic brand commemorates the groundbreaking horlogical event with the launch of two limited edition Altiplano timepieces at the SIHH 2017

The larger of the two watches, the Altiplano Self-Winding features the word ‘Automatic’ beneath the Piaget logo at 12 o’clock which appeared on the brands very first ultra-thin watch. Its white gold case is fitted with a sapphire crystal. It houses Piaget’s self-winding Caliber 1200P measuring 29.9mm in diameter and just 2.35mm thickness and offering a power reserve of 44 hours. Needless to say, like all Piaget Manufacture movements, it boasts a high level of finishing, with circular Cotes de Geneve, beveled bridges, a circular-grained mainplate, blued screws and sunburst-finish wheels. The watch, (Ref. G0A42105) is limited to 360 pieces.

The other watch, limited to 460 numbers is the Piaget Altiplano Manual-Winding 38mm which too features a white gold case but is equipped with the manual-wind Caliber 430Pwhich is just 2.1mm thick and has a diameter of 20.5mm, is a descendent of the original Caliber 9P and offers a power reserve of 43 hours. It is hidden behind a decorative engraved caseback featuring Piaget’s logo and coat-of-arms along with the watch’s limited edition number.

Necessity the mother of innovation

Piaget was founded in 1874 in the village of La Cote-aux-Fees by Georges Piaget, a farmer who crafted watches during the long winters for some extra money. It was in 1911 when his son Timothee Piaget took over the company and made the timepiece business a full-time endeavor. But initially Piaget made watches for other companies who placed their name on them. His sons, Gerald and Valentin Piaget were to register the Piaget brand as a trademark in 1943 and the manufacture in La Cote-aux-Fees has produced its own creations and it became an international brand.

It’s interesting how Piaget started making the world’s thinnest watches. They were created for solving a common problem with timepieces at that period in history. In the late 40’s watches were very small and it was difficult to read the time, so Piaget developed a larger face and larger movement and also made the watch thinner in order to make it more fashionable. It was this innovative touch which would later become the brand’s identity and turn into a fashion trend.

The collection is inspired by the high-altitude plateau of the Andes cordillera, Piaget’s Altiplano captures the region’s pure and natural beauty in its aesthetic lines and is a model that strikes the perfect balance between a dressy and casual watch. So it’s little wonder it was presented as ‘the watch of the international elite’ in the 1960’s by iconic French actor Alain Delon and today has handsome Hollywood actor Ryan Reynolds as its brand ambassador.