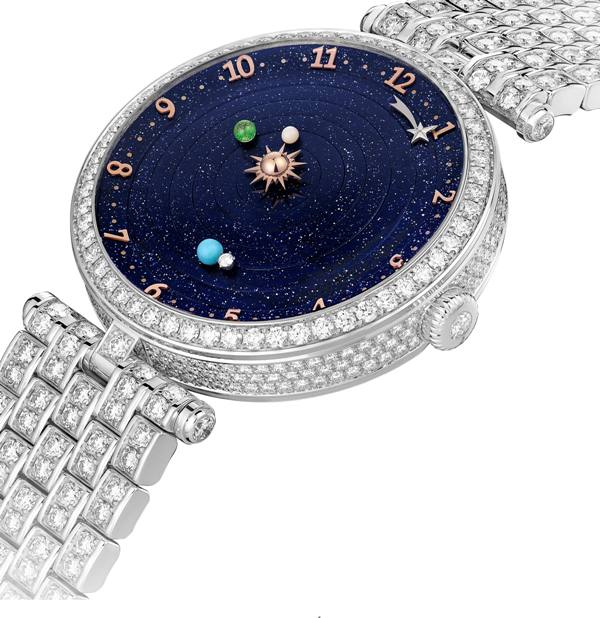 Contemplating the vault of heaven, Van Cleef & Arpels dreamed of living in time with the cosmos: capturing the dance of the planets, tracing the constellations and reaping the stars, to live among them day after day. That dream has inspired precious watchmaking creations, in keeping with the Maison’s distinctive Poetry of Time®. Whether illuminating the twelve constellations of the Zodiac or reproducing the movement of the heavenly orbs, their virtuoso mechanisms bring all the magic of the universe to life on the wrist.

The Poetry of Time

Ever faithful to a poetic view of life, Van Cleef & Arpels instills a distinctive dimension into the art of watchmaking: that of dreams and emotions. A blend of inventiveness and fantasy, the Maison’s creations interpret the measurement of time as an invitation to imagine, wander and revel in happiness. 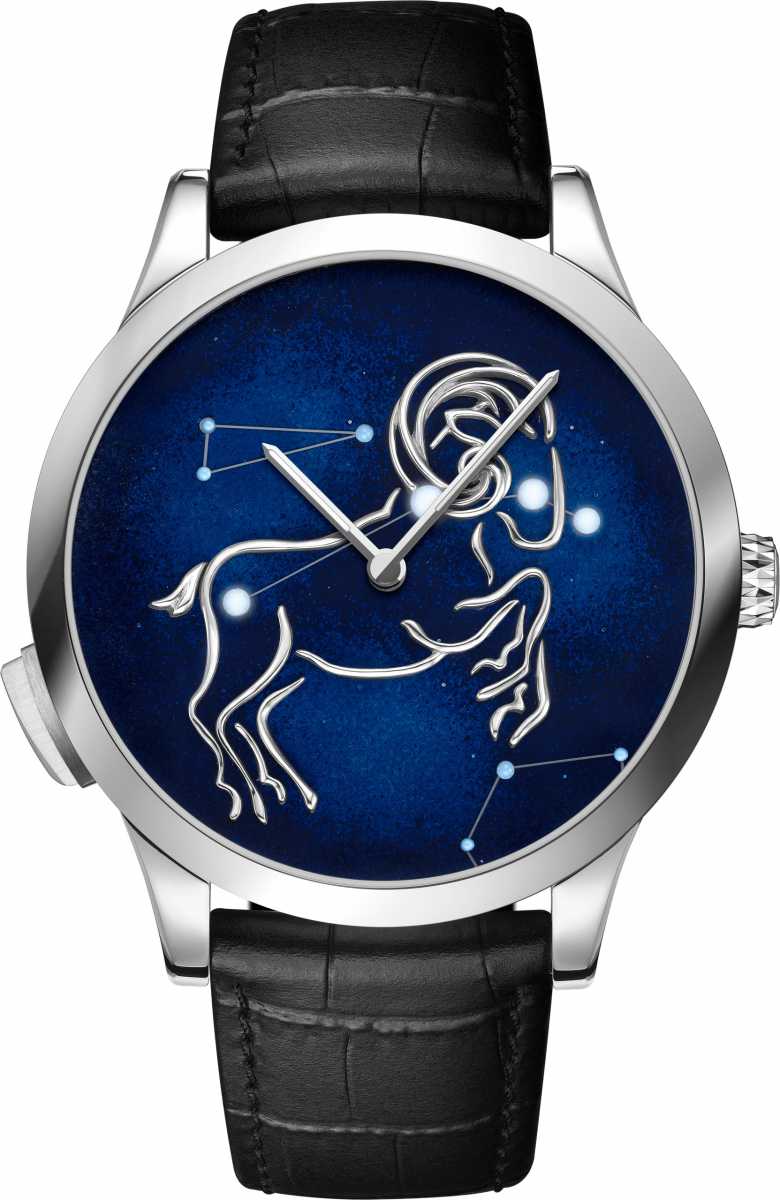 The Maison draws from its history and emblematic sources of inspiration to depict the poetry of each instant. New tales of love and luck take their places alongside creations evoking Van Cleef & Arpels’ heritage. Fairies and ballerinas tick away the hours, while the rhythm of nature meets that of the cosmos. Representing the various watchmaking collections, each piece relates a moment of grace and enchantment. 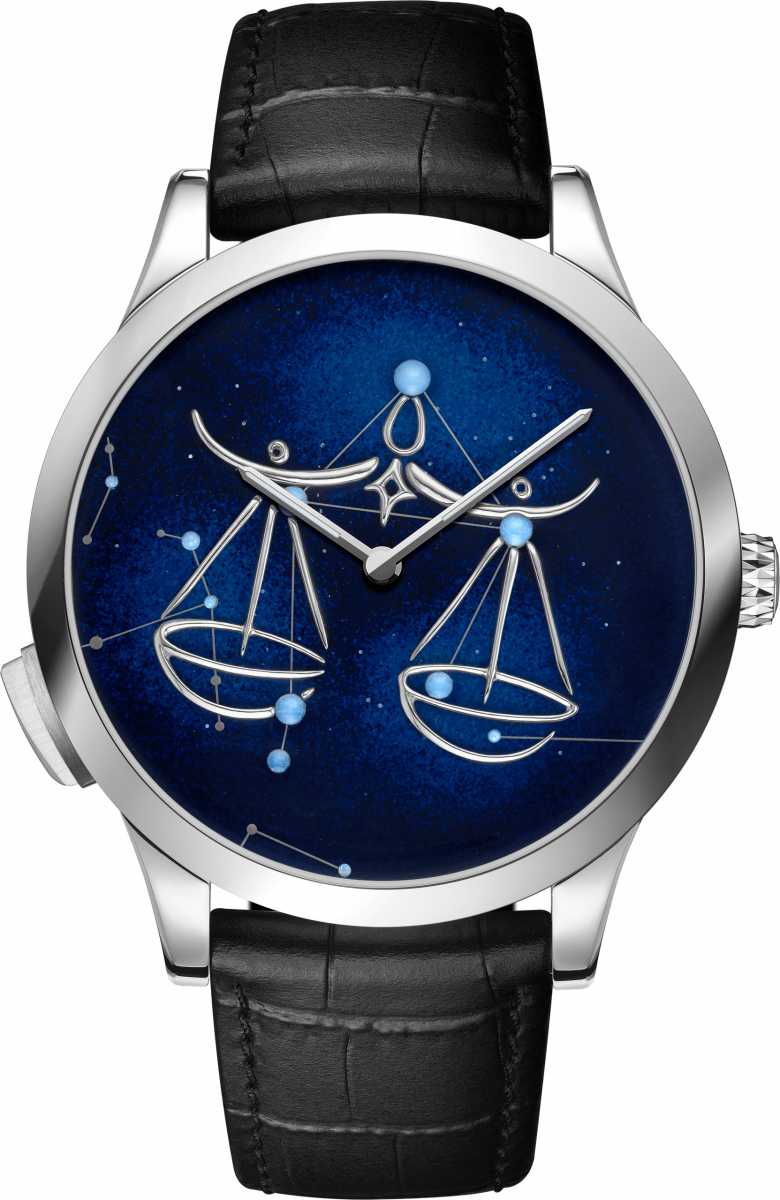 Dazzled by the spectacle of the heavens and stars, Van Cleef & Arpels pays homage to these marvels with its Poetic Astronomy™. A starry sky, the constellations of the Zodiac, the journey of the Sun and Moon, the ballet of the planets: the creations combine the poetry of the heavens and the measurement of time to endow each instant with a unique emotion. 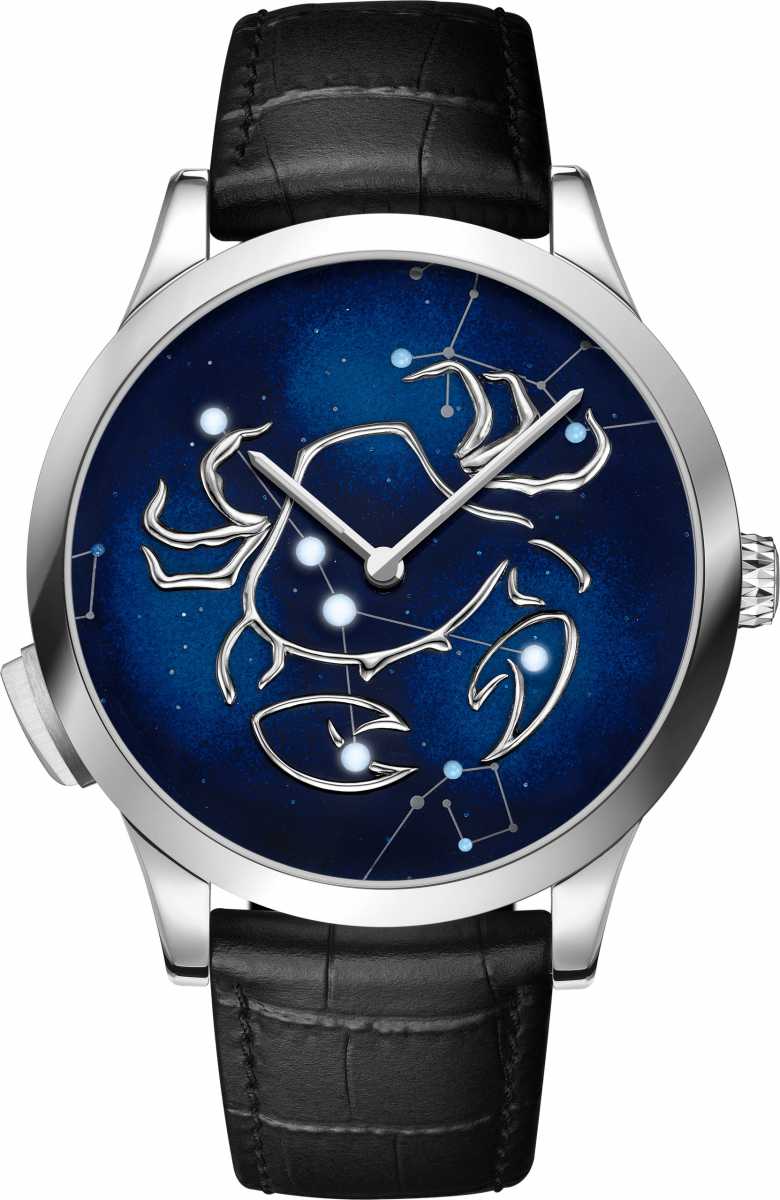 Throughout the collections, watchmakers, jewelers and craftsmen deploy their savoir-faire to bring miniature tableaux to life, ushering the onlooker into a world of contemplation and dreams.

Poetic Astronomy offers an invitation to live in harmony with the rhythm of the cosmos. Today it is enriched with a new set of twelve feminine Lady Arpels Zodiac Lumineux models, which join the masculine Midnight Zodiac Lumineux watches introduced at the SIHH 2018. These watchmaking creations recreate the sparkle of the stars with an exclusive light-on-demand module, first developed in 2016 for the Midnight Nuit Lumineuse watch. This automatic mechanical movement now illuminates the twelve signs of the Western Zodiac. 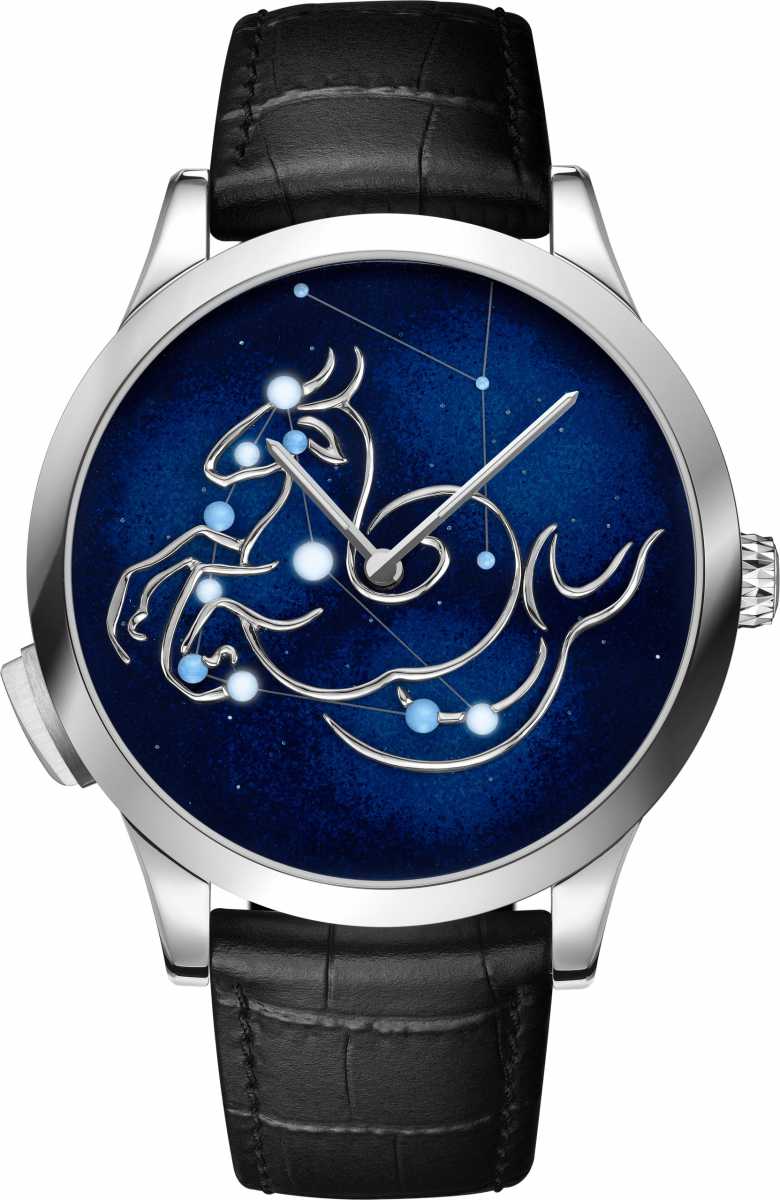 The astrological theme has been a dear one for the Maison ever since the first lucky medals created in the 1950s. Here, it comes to life in twelve luminous dials: Aries, Taurus, Gemini, Cancer, Leo, Virgo, Libra, Scorpio, Sagittarius, Capricorn, Aquarius and Pisces. 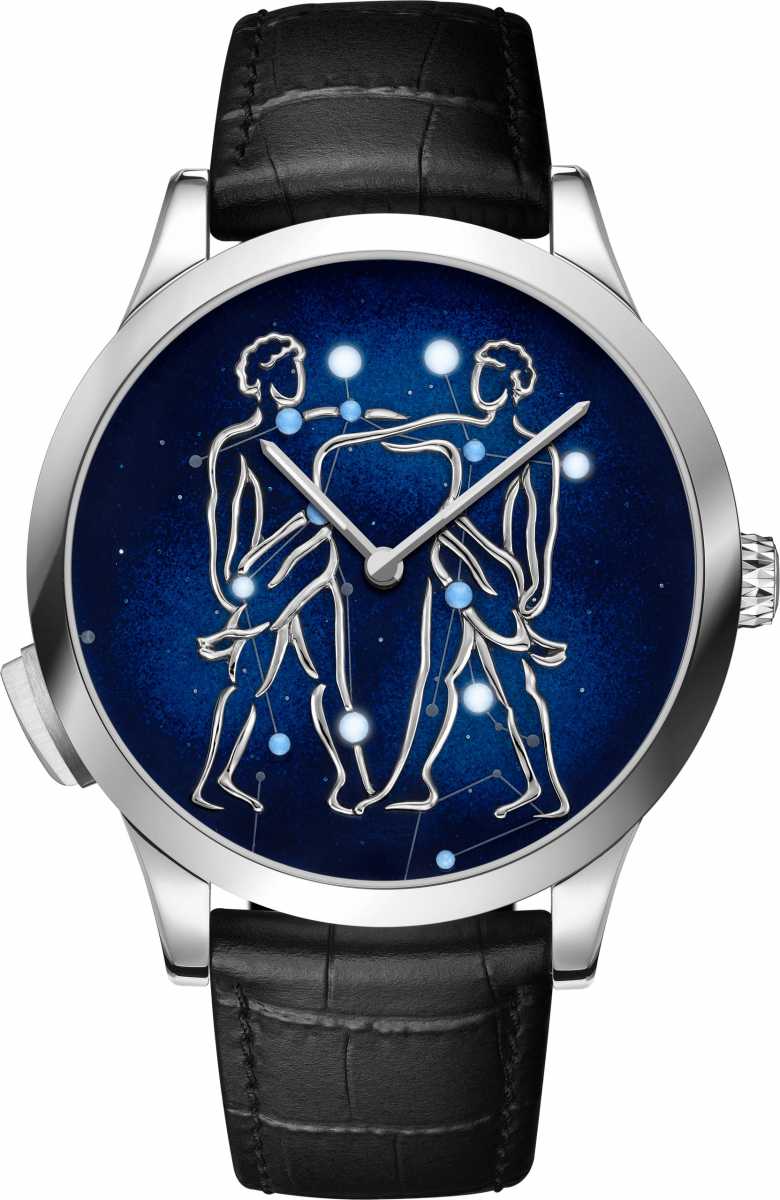 A blend of savoir-faire

The Midnight Zodiac Lumineux watches’ spellbinding illumination has its origins in a phenomenon known as piezoelectricity. An object of study since the 18th century, it refers to the capacity of certain materials to accumulate an electric charge when subjected to mechanical constraints. Developed exclusively for Van Cleef & Arpels, the module incorporates a piezoceramic blade whose vibration ‒ under the effect of the watch’s movement ‒ enables electrical energy to be generated mechanically. This energy is then used to supply from four to six LEDs: at the press of a button, they backlight the dial’s translucent enamel beads for about three seconds. 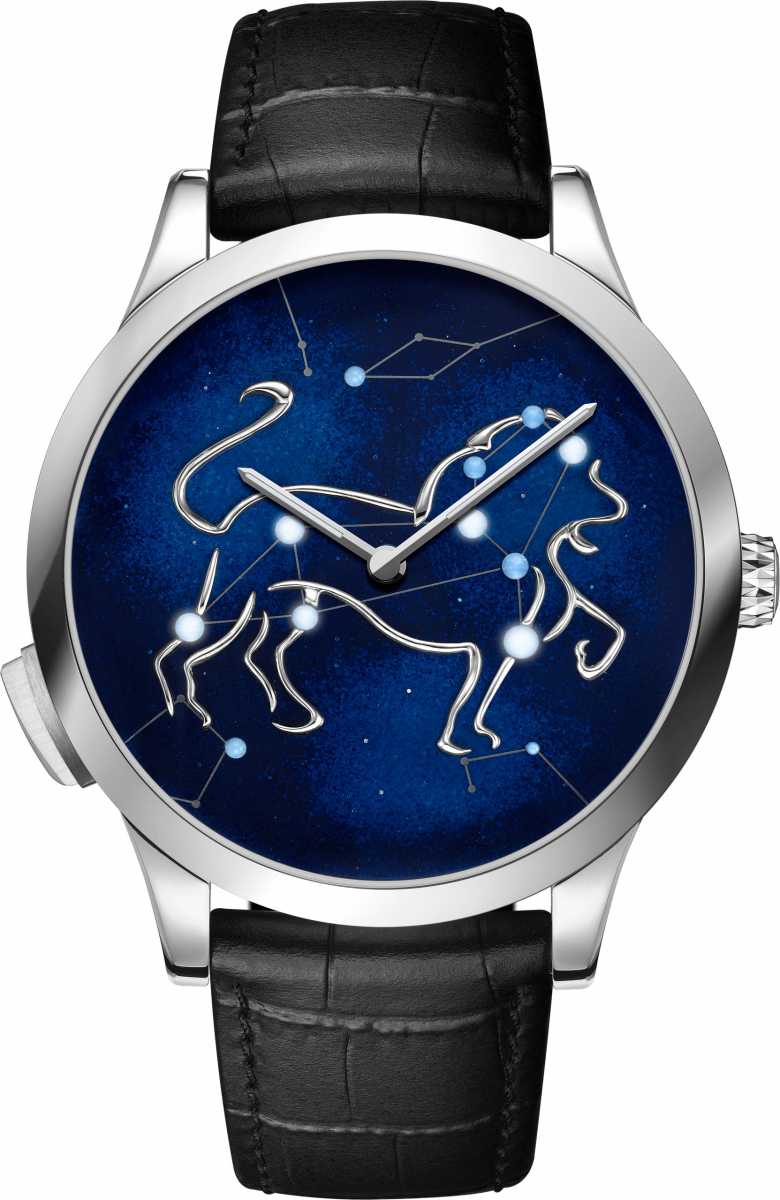 The dials brought to life by this technical feat are decorated at Van Cleef & Arpels’ Meyrin workshops in Switzerland. Intricately and individually sculpted in white gold, the Zodiac signs on the masculine watches stand out against a background in blue pailleté enamel, evoking the heavenly vault. On the feminine watches, these symbolic figures are adorned with white or yellow gold, precious stones and enamel. The depths of the cosmos are suggested by an intense glittery effect on the blue, nuanced by an interplay of light and shade. The four elements are depicted by different tones of stones and enamel: green for earth, orange for fire and gradations of blue and violet for the air and water signs. 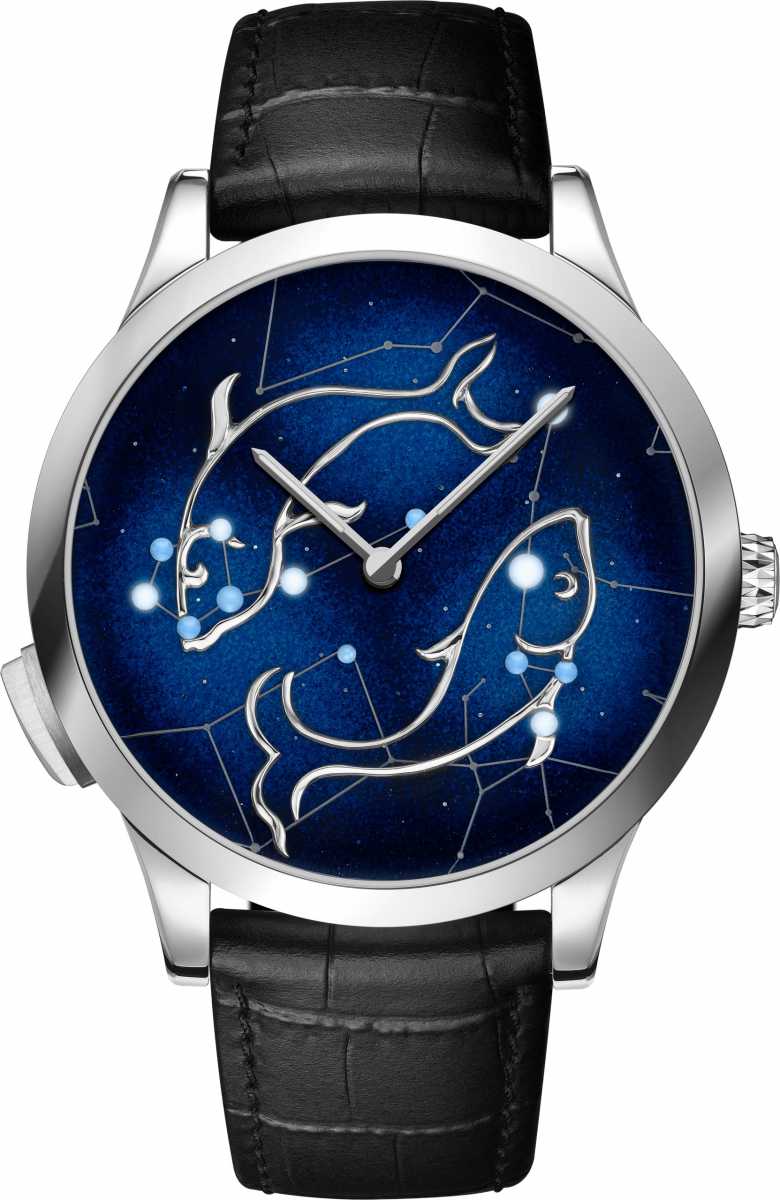 Within each constellation, several points are represented by delicate enamel beads: shaped by hand and mounted on the dial, some of them light up like genuine stars.

A feminine vision of the cosmos 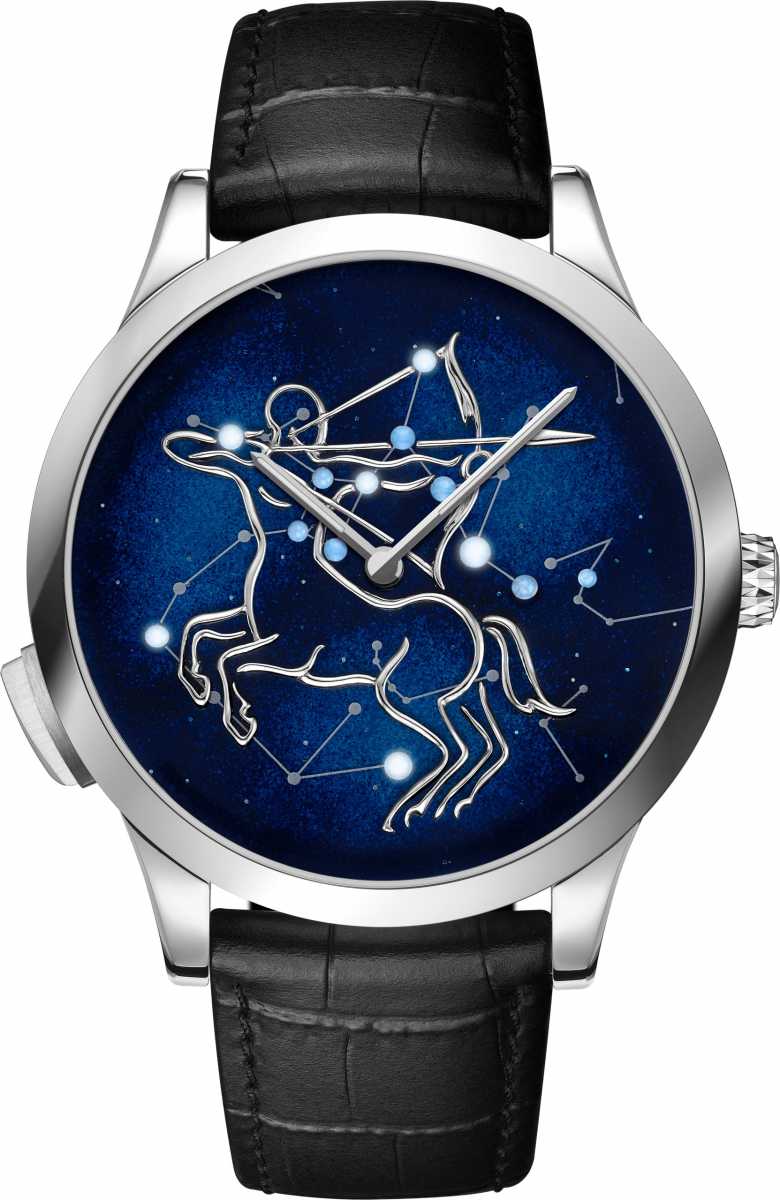 As part of Poetic Astronomy, Van Cleef & Arpels has revisited its Midnight Planétarium™ watch to provide a feminine interpretation. Featuring both refined aesthetics and an automatic movement developed exclusively for the Maison, the Lady Arpels Planétarium watch depicts the Sun and its closest planets: Mercury, Venus and Earth – accompanied by its satellite, the Moon. Each heavenly body moves at its actual speed, orbiting the dial in 88 days for Mercury, 224 days for Venus and 365 days for Earth. In a major innovation, the Moon also rotates around the Earth on this piece, completing its orbit in 29.5 days and bringing the dial to life with its daily dance. 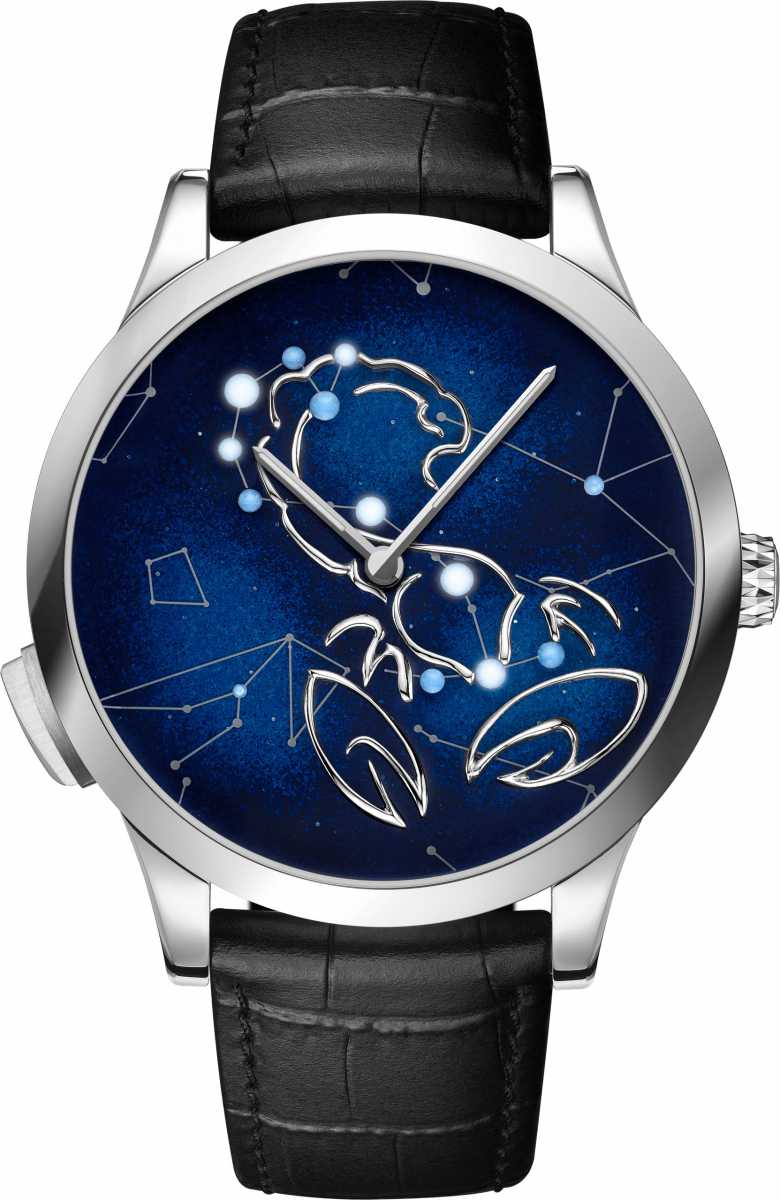 The choice of planets, imbued with feminine symbolism in the case of Venus and the Moon, is accompanied by the careful adaptation of the timepiece’s dimensions to a woman’s wrist. The Lady Arpels case – 38mm in diameter and set with diamonds on the sides of the case and bezel – houses a movement redesigned for this smaller size, with an exclusive module based on an idea from Christiaan van der Klaauw. The dial’s refined design combines the spectacle of the planets with that of a shooting star in rhodium-plated gold, indicating the time with poetic grace. On the back of the watch, two apertures display the day, month and year in the midst of enchanting decoration.

Two bracelets are available to suit any occasion: a blue glitter alligator strap to match the dial, and a bracelet entirely set with diamonds for a High Jewelry effect. To recreate the awe-inspiring experience of stargazing, Van Cleef & Arpels has taken special care in selecting and working with the traditional materials of jewelry and watchmaking. Planets of differing volumes rotate around a Sun made of pink gold, gleaming in the center of the dial. The pink mother-of-pearl Mercury and turquoise Earth have been meticulously hand-cut in spherical shapes, while Venus is portrayed by a green enamel bead, fashioned at the Van Cleef & Arpels enamel workshops in Meyrin. 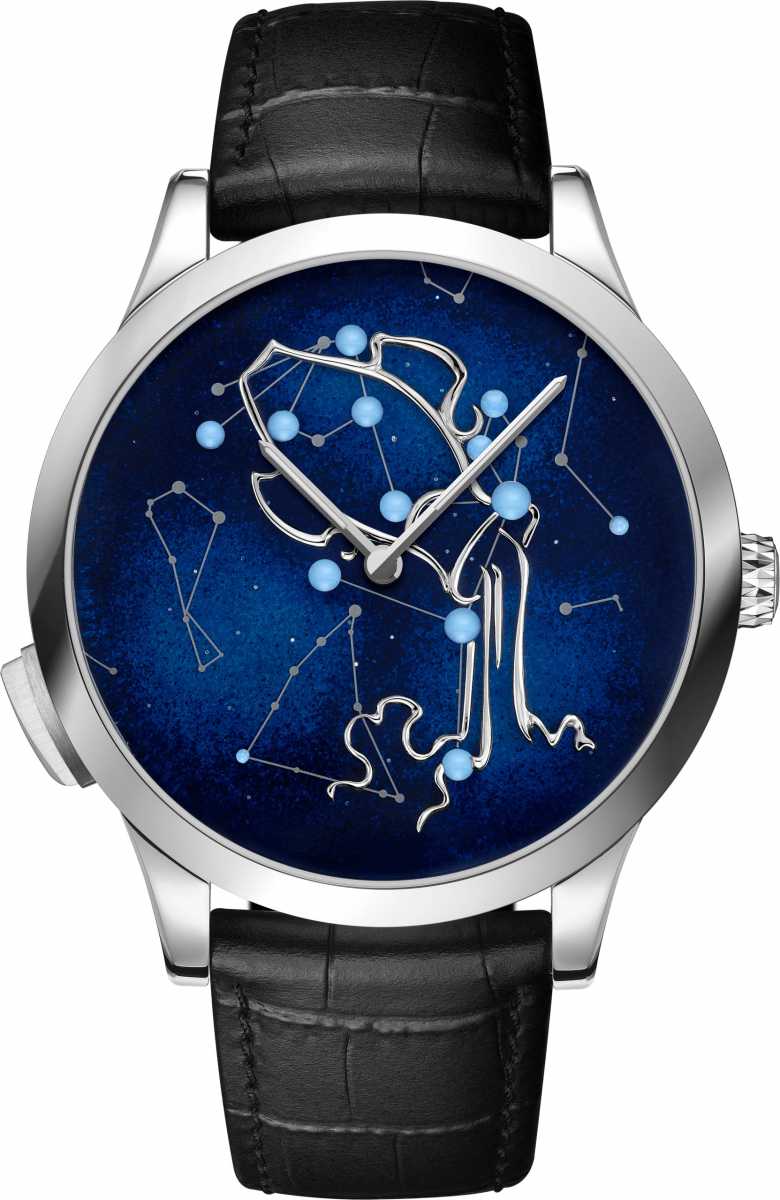 The familiar glow of the Moon as it orbits the Earth is brought to life by a brilliant-cut diamond, which contrasts with the midnight blue background.

Evoking the depth of the cosmos, seven aventurine discs are placed in concentric circles on the dial, several rotating individually via the watch movement. The planets and shooting star thus move at their actual speeds through a sparkling environment. 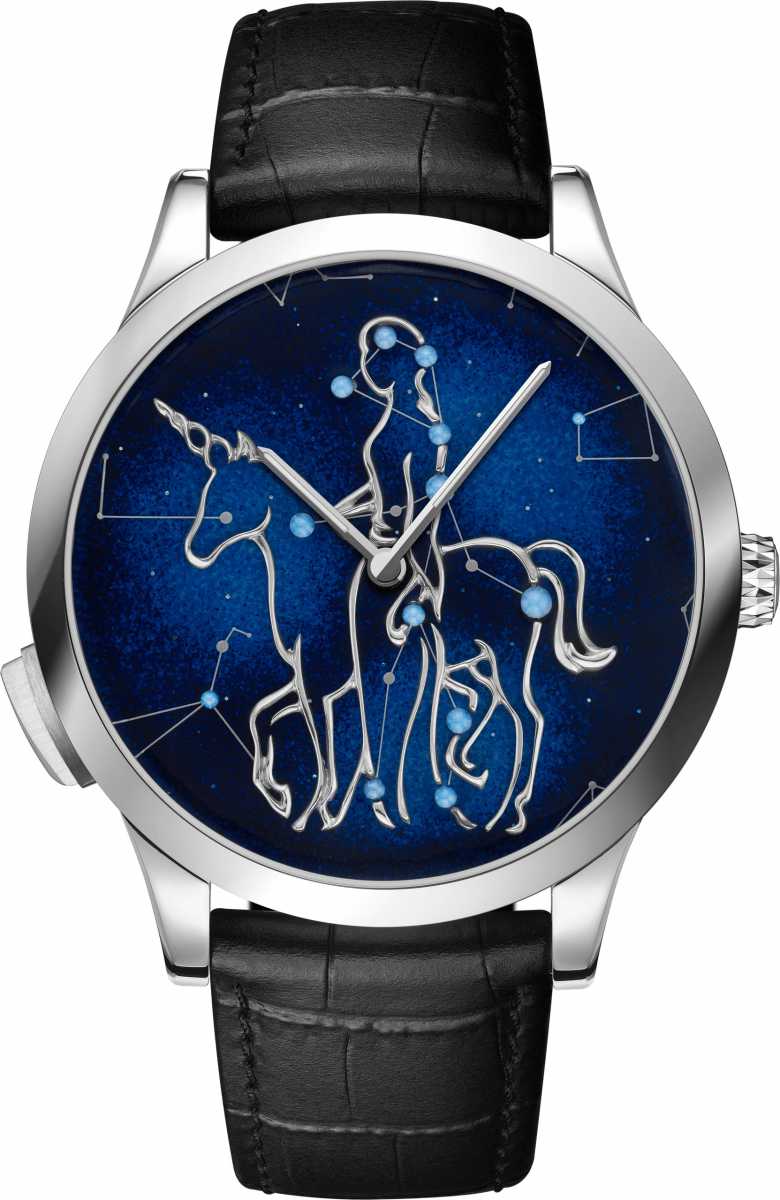 The same shades are repeated on the back of the case, with the celestial bodies in their respective materials reappearing on an aventurine disc. At its center, the oscillating weight continues the journey with a precious depiction of the Moon: a turquoise circle embracing a crescent embellished with diamonds of varying diameters. The emotion conveyed by the final creation combines a plunge into the depths of the universe with the beauty of fine jewelry craftsmanship.