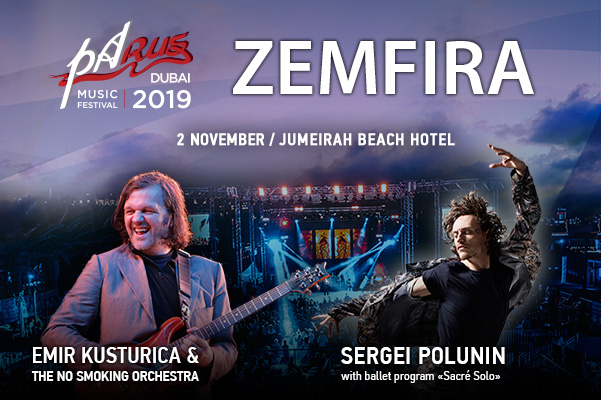 PaRUS, one of Dubai’s biggest international music festivals, is making a grand return, and this time it’s bringing ‘international legends’, Russian tunes and even a Mixed Martial Arts (MMA) championship.

The music festival in Dubai kicks off on Thursday October 31 at Jumeirah Beach Hotel’s Events Arena, with tickets starting at Dhs195.

The four-day event will feature a MMA championship, with its own MMA fighter-style cage, and award-winning Russian artists performing stand-out gigs.

First off the bat, ‘one of the greatest ensembles in Russia’ – Leningrad. The popular Russian rock band from Saint Petersburg will be singing all the top-chart tunes from all the way back in the ‘90s. Band leader Sergey Shnurov is known to be a real crowd-pleaser.

The very next day will see Sergei Polunin and the region’s premiere of “Sacré Solo” ballet, Serbian music phenomenon Emir Kusturica & The No Smoking Orchestra, and returning Russian rock-star Zemfira, after her debut in 2016.

To finish off, the Events Arena will turn into the an open-air cage for fighters from the UK, Brazil, Russia, Jordan, Lebanon, Iran, Belarus and USA, featuring special guest Bellator heavyweight striker Sergei Kharitonov.

Headliners of the day Rainbow and Deep Purple Joe Lynn Turner will take to the main stage for ‘outlaw’ rock music to finish off the musical extravaganza.