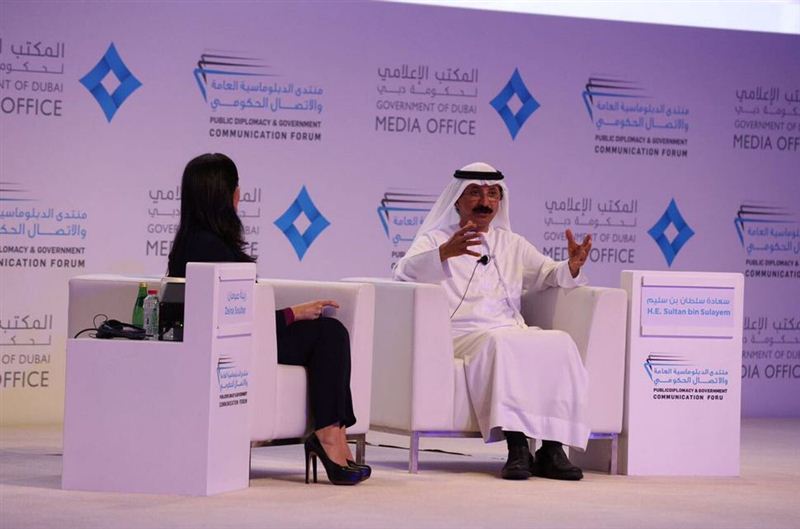 Speaking at the one-day Public Diplomacy and Government Communication Forum (PDGCF) in Dubai, Sulayem pointed out that diplomacy in the past was confined to political relations among countries.

“But today it is different thanks to the efforts of H.H.  Sheikh Abdullah bin Zayed Al Nahyan, UAE Minister of Foreign Affairs and International Cooperation, who is building bridges, connecting our country to the world and raising the importance of good economic relations,” Sulayem said.

Mutual Interests
Speaking on ‘The Value of Trade’, the DP World Group Chairman and CEO pointed out that mutual economic interests lead to better and stronger relations at political level.

Sulayem said the global company grew out of the UAE. “We are present in 40 countries and operate 77 ports worldwide. It is a matter of pride that these countries rely on Dubai and the UAE to operate their ports. Communications and diplomacy are very important to our business,” Sulayem said.

He gave the example of World Expo 2020, which Dubai won to host. “DP World played a significant role behind the scenes. We used our soft power as a source of marketing.”

He pointed out that it is not easy to persuade governments and people to allow foreigners to run important businesses such as ports. “But we have succeeded,” said Sulayem, while giving the example of Brazil, the London Gateway in the UK and Canada.

Personal Touch
“In Canada, we have a port in Vancouver which is linked to the US. The indigenous people there had bad relations with the former operator. I took a chef with me from Dubai and sat with them in the wild, cooked fish, which they liked, and served them myself. After that, even the federal government was surprised with the speed and ease with which we got permissions from the natives,” explained Sulayem.

He said DP World started off 60 years ago and its first venture overseas was Jeddah, followed by Djibouti, Romania and Cochin.

“Since 2006, we have invested $20 billion to develop our business. We have loans of only $2.9 billion which we repay within three years if we wanted.”

Sulayem said governments want to grow the economy and they are open to ideas. He gave the example of a meeting that lasted a few minutes with Indian Prime Minister Narendra Modi, which was extended to 45 minutes because Sulayem proposed a solution to India’s transportation problems.

Similarly, the Hong Kong government would not let them close a loss-making port but helped DP World turn it around, Sulayed revealed.

Held under the patronage of His Highness Sheikh Mohammed bin Rashid Al Maktoum, Vice-President and Prime Minister of the UAE and Ruler of Dubai, the Public Diplomacy and Government Communication Forum is a leading event that explores how government entities can optimise their communication efforts in today’s digital age.

Organised by the Government of Dubai Media Office (GDMO), the forum looks at a range of communication issues that governments encounter in the light of recent political, social, environmental and security developments.

The event discusses communication success stories and learnings from major campaigns, crises and events. The Public Diplomacy and Government Communication Forum brings together ministers, senior government officials, academics and experts in the fields of communications and media from the region and across the world.