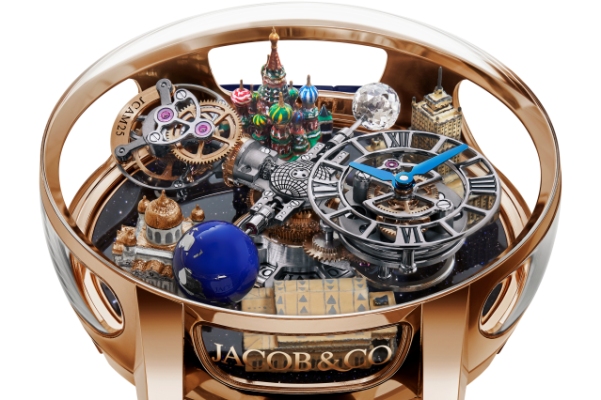 When the Astronomia Tourbillon first appeared in 2014, the amazing sapphire crystal of the case was envisioned as a “gallery” of sorts to display first the incredible Astronomia triple-axis movement, then this evolved into displaying special works of art. The brand started with Dragons, Octopi, Spiders, Horses and more. 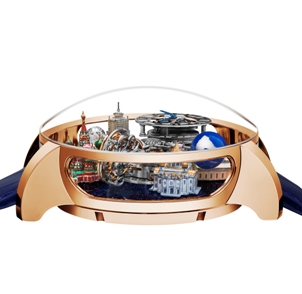 Incredibly successful since it began, Jacob & Co. has expanded the Astronomia Tourbillon Art Collection every year since, and now for the first time the brand is highlighting one of the world’s most important and largest cities, Moscow. Founded in 1147, the city is situated on the Moskva River, which winds through the city – 49 bridges span the river within the city limits. Moscow is the centerpiece of Russian culture, religion, art, government, business, and education. The exquisitely finished buildings inside the gallery of the Astronomia Art Moscow are: Saint Basil’s Cathedral, a Christian church in Red Square, is one of the most famous monuments in the world. Designed to look like the flame of a bonfire, it is known as “the flame of Moscow.” The Cathedral of Christ the Saviour, a resplendent Russian Orthodox cathedral on the banks of the Moskva River, is famous for its gold-colored domes and Byzantine architecture. The Bolshoi Theatre, the historical center of Russia’s performing arts, was opened on Tsar Alexander II’s coronation day in 1856. Home to the Bolshoi Ballet and the Bolshoi Opera, the oldest and most renowned companies in the world, the Bolshoi Theatre is famous the world over. Hotel Ukraina is one of the “Seven Sisters” of neo-classical Stalin-era buildings located in Moscow, and it was once the tallest hotel in the world. A true landmark of the city, it remains a hotel today, and a five-star luxury one at that. 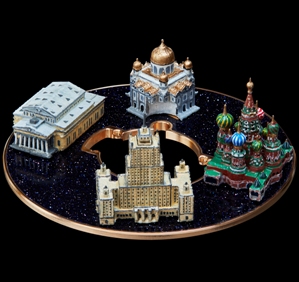 These four buildings are hand-engraved and hand-painted by traditional métier d’art artisans. Many hours of hand work go into these miniature works of art. They are, in turn, set into an aventurine base, a beautiful glass that looks like a starry sky. 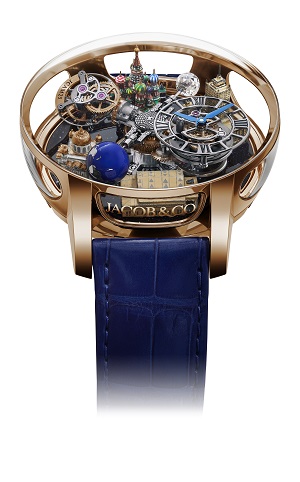 Moscow is one of Jacob & Co. founder Jacob Arabo’s favorite cities, and the Astronomia Tourbillon is the ultimate showcase for these amazing artistic creations. Customization and bespoke work has been the foundation of Jacob & Co. since the beginning and continues to this day. The brand is definitely open to making custom watches of all the great cities of the world. Visit any Jacob & Co. point of sale or contact the brand directly to inquire.

The Astronomia Art Collection has become an icon within the brand and collectors look to Jacob & Co. to see what’s coming next. The pièce unique Astronomia Art Moscow is an incredible tribute to this fascinating city and a showcase of Jacob & Co.’s commitment to using métier d’art in a modern way.