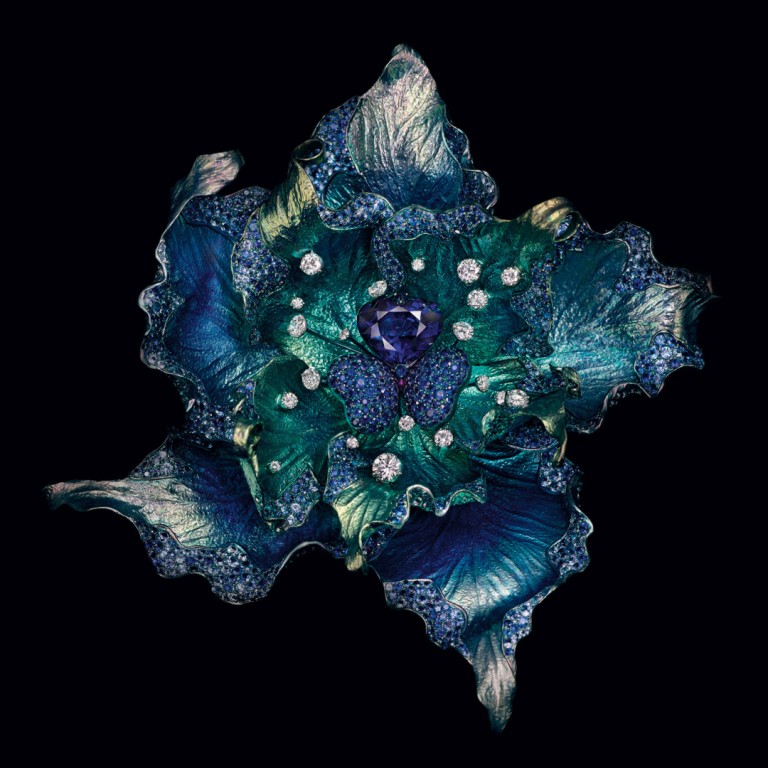 At the premiere of Jodie Foster’s ‘Money Monster’, held at the 69th Cannes Film Festival, Oscar winning US actress Julia Roberts dazzled in a platinum necklace from Chopard’s Red Carpet Collection featuring a pear-shaped emerald (52.76cts) and diamonds (43.41cts), along with a ring in 18k white gold set with a pear-shaped emerald and diamonds and a pair of diamond studs, both from the High Jewelry Collection. Chopard marks its 18th year as official partner of the event and unveiled its Red Carpet collection 2016 featuring 69 pieces.

The famous Russian fairy tale, "Swan Lake" inspired the enchanting Hechizo by Magerit collection unfurling jewellery delights such as this pair of gorgeous 18k yellow gold Misterio High Jewellery earrings featuring olive green peridots. Odile and Odette appear as the main protagonists in this jewellery pieces, playing on the contrast between innocence and daring, and highlighted by swans, feathers and nymph-like beings.

Parisian jeweler Boucheron pays charming tribute to the feathered fraternity in its new Nuri Cockatoo pendant earrings where each features two colourful birds flaunting pave tsavorites and orange, pink, yellow round sapphires and diamonds on pink gold settings. In Indonesian, ‘Nuri’ stands for parrot while their plumage symbolizes the elements of life such as water and fire.

Legendary Spanish jeweler Carrera y Carrera's sculptured artistry is showcased to flattering lengths in its Pendientes Garzas earrings. Designed to put you in the limelight, they combine 18k gold set delicately with diamonds and are inspired by the herons embroidered on Manila shawls featuring voluptuous forms, sublime detail and magnificent finishes.

London jeweler Graff's pair of eye-catching and pretty Carissa Ruby Double Flower earrings features 22.12 carats of rubies and 4.47 carats of diamonds. Fashioned at an unusual angle, each of them features a pair of five-petal Carissa blooms from which ‘drop’ a tassel of three rows of diamonds, each of which set with a pear-shaped ruby.

Hinting at a light, casual charm that calls out to the young and young at heart, Extremely Piaget’s white gold earrings are set with two cushion-cut black opals on the ear lobes, ringed by brilliant-cut diamonds. From each of them dangles an alternately set blue sapphires and emeralds, each of which is in turn ringed by diamond brilliants.

The ability to think out of the box set de Grisogono apart in a league of its own. The Swiss jeweller’s new Allegra necklace is contemporary and glam all at once featuring five bands slung ever so casually across the wearer’s neck. Each of them splits into two with each closely set with diamond brilliants.

Is that a rainbow ball dangling around your neck? If so it must be Faberge’s exotically coloured magical Mosaic egg pendant necklace! The brand which is now owned by colored gemstone mining and marketing company, Gemfields, unfurls a jewel set with Mozambican rubies, sapphires, tzavorites and diamonds, invisibly-set with a technique that uses single-faceted gemstones, calibrated in ribbon-like narrow rows, allowing the gold setting to remain invisible for the mosaic pattern finish.

Mouawad’s magnificent high jewellery and exquisite masterpieces are designed for red carpet glory.  With a dazzling array from classic to contemporary styles on offer, these exceptional pieces feature some of the finest diamonds and colored gemstones. It’s astonishing Imperial Desire Ruby necklace is composed of a string of diamond brilliants ‘laced’ by a row of 4-petal blooms and dangles a peerless ruby richly encircled by diamonds in various cuts.

Roberto Coin’s Cobra Unique Haute Couture necklace will endear the reptile to you. Shaped like a heart around the wearer’s neck, it is richly encrusted with diamond brilliants and pave diamonds, while the cobra’s eyes sparkle with the designer’s signature gem stone rubies. According to an ancient Egyptian belief the reddish-colour stone offers mysterious protection to its wearer.

Marie-Etienne Nitot, who founded what we now know as Chaumet in 1780, was jeweller to Napoleon Bonaparte, whose emblem was a bee, a symbol of industry.  It’s but natural that the famous brand dedicated collections to this important member of the flower kingdom, the bee, whom we have long ignored much to our peril. It’s yellow and white gold Abeille brooch captures the busy insect in a crisp beautiful fashion decked in mandarin garnet and peridot. A detachable feature, it can be worn as both a brooch and as a necklace.

Wallace Chan’s enthralling Heart in Bloom brooch is verily a sublime offering at creativity’s altar. Just viewing it will put you in a trance and such is its beauty that it leaves one too stunned for words that one feels blessed to just view it. In it, every petal is painstakingly curled at just such an angle as a gentle breeze would move it while in its heart rests a heart-shaped blue sapphire on which sits a pave-set butterfly. Enhancing  the dreamy effect of a galaxy is a tasteful sprinkling of diamonds

American diamond jeweller Harry Winston was said to be a born genius when it came to precious stones and was hailed throughout his life as ‘The King of Diamonds’ and ‘Jeweller to the Stars’. He was also a great philanthropist. We present his eponymous brand’s Diamond and Ruby brooch circa 1970 featuring a delicate foliate design, lavishly set with oval and circular-cut rubies and marquise-shaped diamonds.

Van Cleef & Arpels Ballerina brooches are signature pieces of the famed Parisian brand and were the outcome of its founder Louis Arpels’ passion for classical ballet and opera. Their faces are depicted by a rose cut diamond while their typical costumes feature a technical breakthrough – the intricate ‘Mystery setting” which conceals the supporting metalwork allowing the gemstones to form a solid field of colours with each brooch taking up to 300 hours of work!  We feature a piece depicting a ballerina pirouetting in a rich, emerald and diamond-set costume.

Inspired by nature and wildlife, Tiffany & Co’s Owl brooch is an exemplary execution of gem matching, color graduation and pavé technique. It features the nocturnal bird crafted in 18k white gold with an extremely sprightly look on its face decked in pave diamonds and sapphires. Just the lucky accessory for your boardroom or evening attire we suggest.

Summery and fresh, Paspaley’s Viva Topaz earrings are a visual treat! In them, the vibrant blue Spirit Cut Topaz is unpredictably set with a hint of intense Mandarin Garnet and pavé diamonds for a contemporary look. This design offers the versatility of two styles through detachable pearls presenting a jewel of true adaptability.

Cartier's Trinity ring features an awesome golden Tahitian pearl ‘wrapped’ at its base with swirls of white and yellow gold settings richly set with diamonds. It makes us recall legendary film icon Audrey Hepburn of ‘Roman Holiday’ fame. One of her most enduring images portrays the lovely star with a shawl wrapped stylishly around her neck.

Chanel's Signature de Paerles collier from its “Signature de CHANEL” collection, features by the quilted pattern inspired by the equestrian world loved by Coco Chanel, especially the stable boys jackets. The collier showcases numerous strands of Japanese cultured pearl designed to ‘garland’ the wearer’s neck and is clinched by an 18k white gold clasp and a highly decorative pendant-like design. Together they are set with a 3.4 carat emerald-cut diamond and 717 brilliant-cut diamonds.

The master of Gothic jewellery is surely Stephen Webster. His creations perfectly juxtapose the Yin with the Yang. If he depicts a rose it comes along with a thorn and a heart with a dagger. Likewise, his Lady Stardust Pearl ring features the orb-like, lustre, smoothness and even innocence of a sumptuous South Sea pearl rising up from an angular, jagged and sharply pointed base.