Meet the region’s first ever bearcat at The Green Planet, Dubai 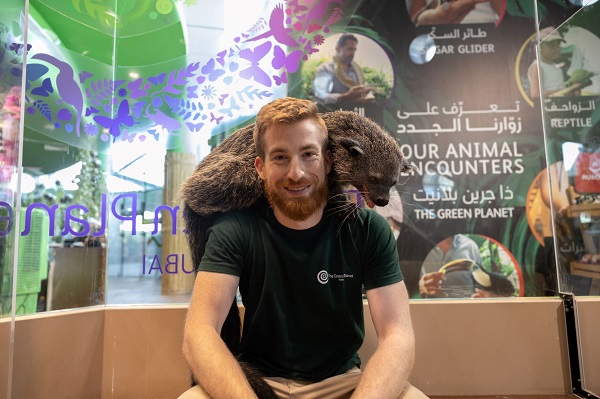 The largest animal to ever call Dubai’s only in-door rainforest, The Green Planet “home” has just arrived and guests will now have the rare chance to meet and interact with “Fluffy”— the first ever bearcat to live in the region!

Named after his fluffiness and irresistible cuteness, Fluffy is a 2-year-old boy bearcat, or Binturong, and can live up to 25 years. His species have the name “bearcat” because of their cat-like-head, body like a bear and tail like a monkey (which is prehensile, so it is just like another arm and almost as long as their bodies!) but don’t be fooled! They are not actually related to a bear or a cat, they are in fact in the Viverridae family (ancient group of small to medium sized mammals only found in Old World or eastern Hemisphere). 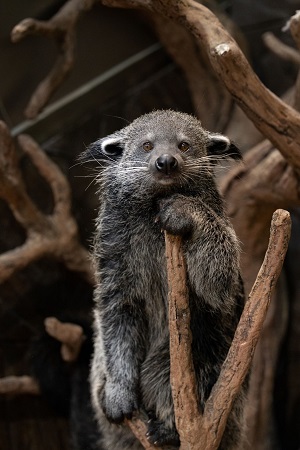 Fluffy currently weighs just over 14kg but can grow to weigh up to 30kg and up to 80cm long, making him the largest animal to call The Green Planet home and the first ever bearcat to live in a large mixed species exhibit with so many other species of animals. This will also be the first time in the world that a multi-species rainforest biodome has introduced larger animals such as bearcats and lemurs.

Victoria Lynn, General Manager - Dubai Holding Entertainment - Attraction, said: “Fluffy was born at a zoological facility in Serbia. He is a solitary animal, which means that he does not live in groups or families and therefore, it was time for him to leave his parents and become an ambassador on behalf of his species and for all larger rainforest animals. By joining The Green Planet, he will help to teach us more about the incredible Bearcat species and help to educate our guests and visitors on why the protection of the environment and the Bearcat habitat is so important. Fluffy is currently settling in well to his new home and we look forward to welcoming guests to see him!”

Guests can now have the opportunity of a once-in-a-lifetime experience to see Fluffy in  his new Rainforest home enjoying his lazy tree top naps and eating his favorite food, such as bananas, grapes and apricots. Fluffy is also an omnivore which means he loves the likes of cooked chicken just like the most of us! Speaking of food, Fluffy lets off a natural scent very similar to the smell of buttered popcorn. The Bearcat species have scent glands located under their tails and when those tails are dragged as they move to mark branches and foliage as their territory, they let off a scent reminiscent to the all-time-favourite movie snack to us humans!

Need another reason why Fluffy is so incredible? His kind are only 1 of 2 known animals that have a special digestive enzyme capable of softening the tough outer covering of the fig’s seed. This makes the Bearcat what is known as a “keystone species” in their rainforest’s ecosystem— essential to the survival of the entire rainforest!

Find out even more amazing facts about Fluffy and be one of the firsts to see him, only at The Green Planet!