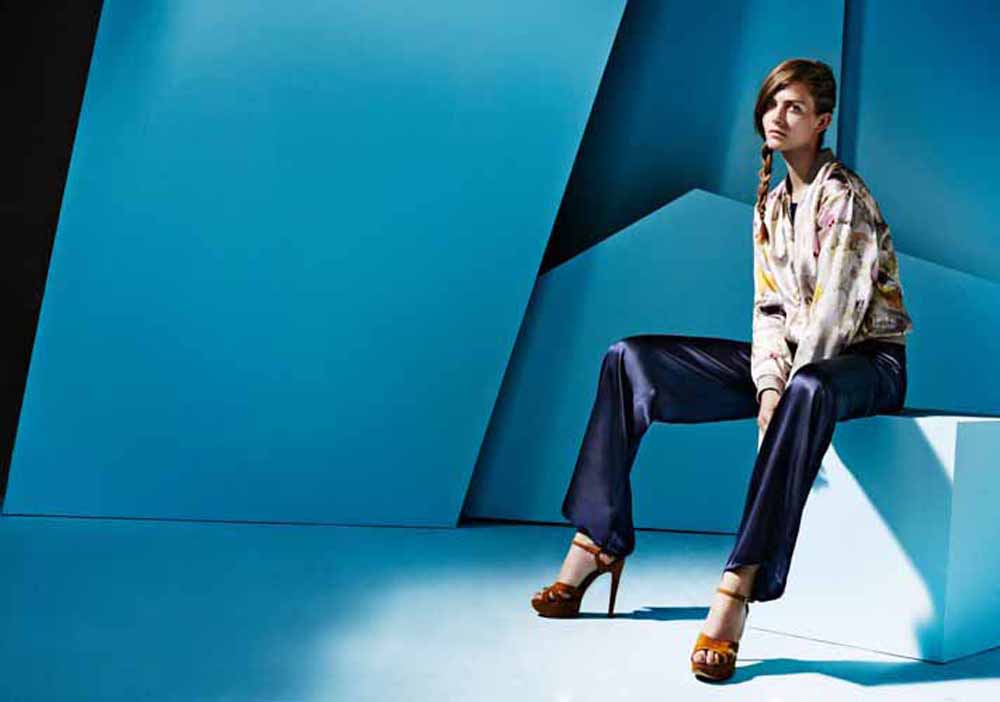 It’s truly art from the heart in an eye-catching palette this summery season. But it’s not just art but features associated with an artist’s studio, such as bold brush strokes, paint splatter and even ink spills (not to forget graffiti) which have inspired several interesting prints and creations. So now you can buy your art and wear it too...

One of the most noticeable trends spotted on the runways was Chinese art as seen on Tod’s casual three-piece suit in white and emerald green featuring delicate Chinese brush strokes of chrysanthemum stalks. Gucci brings in Oriental flavor in its halter-neck dress teaming bottle green on the top half (accented by thick black piping) and indigo blue below featuring bamboo stalks as well as floral motifs.

Will bohemian charms ever cease? Not in the foreseeable future it seems. They are fused with a touch of romance to present flowy pieces with intriguing silhouettes. And proving their irresistible appeal is the ‘Prince of Prints’ Etro with its paisley-pattern dress matched by a shaggy shrug.

While Emilio Pucci’s Boho chic shorts and top in orange with dark green and white designs featuring trumpet sleeves heralds a vacation. Alexander McQueen’s strikingly attractive art-deco dress in violet and white doesn’t need any excuse to be worn. Jean Paul Gaultier’s difficult-to-describe-number meanwhile appears to pay tribute to Star Trek and the discotheque all at once.

Asserting its versatility, denim touches the realms of luxury in a variety of interpretations, washed out, cut into ladylike silhouettes or even turning into delicate blooms as seen in Bottega Veneta’s sweet mini skirt-and-crossover-shirt team-up where denim roses blossom.

Sheer is in as can be seen in Dolce & Gabbana’s striped red and black top teamed with a sheer skirt with embroidered blooms. As also a black Antonio Marras dress with blue blossoms. Ralph Lauren’s safari tribute on the other hand features a sheer top worn over a jeweled sleeveless ganji underneath and is matched by narrow pants, while Carolina Herrera at Saks Fifth Avenue’s presents a highly artistic gown resembling a cracked marble portrait.

The trend was particularly evident in the grandest costume party of the world – the Met Ball 2015, hailed as the ‘Oscars of Fashion’ and whose theme this year was ‘China: Through the Looking Glass’ celebrating the opening of the exhibition by the same name and co-chaired by Jennifer Lawrence (in a Dior dress)  Chinese actress Gong Li, Anna Wintour, and others.

Beyonce appeared in a nude Givenchy Haute Couture by Riccardo, Jennifer Lopez in a Versace gown and Kim Kardashian in a Roberto Cavalli by Peter Dundas gown left very little for the imagination (thank goodness for those strategically placed crystals and embroidery or where would we all be?)

On the other hand, Diane Kruger looked stylish in a soft pink Chanel combo comprising a sleeveless top and pants made especially for her by the great man Karl Lagerfeld himself (Kruger is said to have later called him up and thanked him saying it was perfect for the after-party dance).

Paying tribute to print paradise were two singing sensations both in black Moschino sleeveless gowns – Madonna and Brit singer Katy Perry who wore an unusual graffiti-print number. (BTW, we too have a very pretty strapped top and mini skirt from Moschino with candy-colour prints just for you). On her part, Lady Gaga arrived in an extravagant Custom Balenciaga by Alexander Wang creation in black.

The evening’s darlings were of course handsome George (looking dapper as ever in a Giorgio Armani Made to Measure formal black tuxedo) and Amal Clooney who looked regal in a strapless, red, tiered gown with a spiral effect by John Galliano for Maison Margiela (the gown’s fitting was supervised by Wintour herself according to reports). As a salute for China’s love for the colour red, it looked splendid.

So ‘print it out’, we say (in black and white or in colour)!